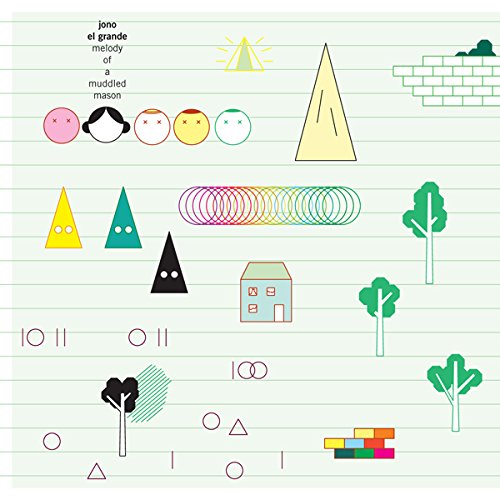 The Norwegian guitarist, keyboardist, composer, bandleader, and conductor (not necessarily in that order) Jono el Grande released his first album in 1999, and Melody of a Muddled Mason is in fact his sixth in sixteen years. Where have I been? Born in 1973, it’s pretty evident he’s given a lot of attention to the Frank Zappa albums from the decade before he was born. While his material is entirely original, it is heavily informed by Burnt Weenie, Weasels and Uncle Meat era FZ, but also classic prog rock from the British school as well (echoes of Gentle Giant, Van der Graaf Generator, various Canterbury bands), and the mix of all these influences makes for some brilliant compositions and arrangements. And he’s a mighty solid guitarist as well. The opener, “Bach’s Beach,” pretty much sums up all those influences in one tidy eight-minute piece, mostly instrumental save two brief sections of unusual vocals near the beginning and end (Beefheart anybody?). The band is a six-piece with guests, featuring saxes, flute, vibraphone, bass, drums, Fender Rhodes, a string section, percussion, and a lot of wacky effects (which might include a slide whistle) and for his part, Jono is credited with guitar, vocals, piano, percussion, and a Farfisa organ that makes a very strong appearance on that opening track. The title track is second up, a full minute longer than the opener, which has a dark and sinister Van der Graaf feel, with several absolutely insane solos for guitar and saxes, all followed by a grooving rock section that might be worthy of a place on Hot Rats. How does that prepare the listener for the minute-and-a-half Stravinsky-like string piece “Lament X”? Well, it really doesn’t, other than to affirm that there’s an unexpected surprise waiting at every turn along this six song, mostly-instrumental set. Very impressive throughout.