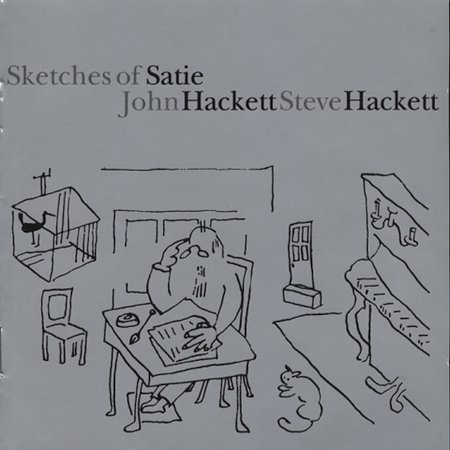 A full CD of the music of Erik Satie comes as no surprise to those familiar with Steve Hackett’s acoustic classical recordings. Even in his work with Genesis and his solo career Hackett has shown a propensity for acoustic pieces that foreshadows this sublime little gem. Satie has been considered the precursor to both minimalism and ambient music with his piano pieces that were written in the late 1800s and early 1900s. His contemporaries were Ravel and Débussy, and he undoubtedly had some influence upon these impressionists. Brothers John and Steve Hackett ambitiously tackle the challenge of piano transcriptions and languid, rhythmically static compositions with only a flute and acoustic guitar. They have succeeded admirably in translating Satie’s piano-based compositions into a new and fresh sonic language. John’s breathy, rich-sounding flute generally states the fairly simple melodies that are occasionally ornamented with exotic scales or a hint of dissonance. The guitar serves mostly as a chordal instrument that exerts a calming influence into the very deliberately paced pieces. The twenty compositions range from stark to sensuous, with some appearing to be vignettes that revel in their beautiful simplicity. Satie and Brian Eno share a similarity in their composition of “ambient” music that can serve as either foreground or background music, and this delightful disc achieves success in both arenas.