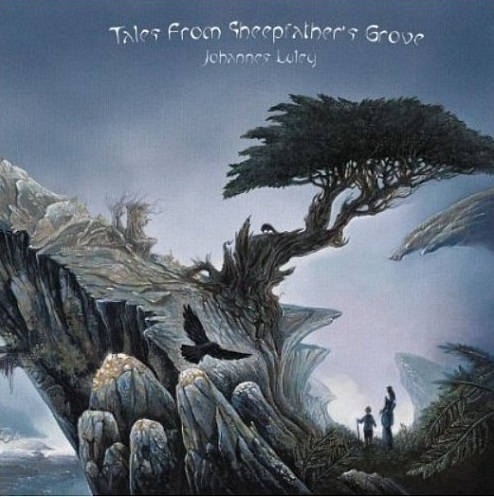 About half a dozen years ago, the debut album by a very Yes-influenced band from Los Angeles called Moth Vellum crossed my desk on its way to one of the other writers. That's pretty much all I remember about it at this point. Johannes Luley was (and I presume still is) the guitarist in that band, and the album at hand Tales from Sheepfather's Grove is his solo debut. The Roger Dean-like cover art certainly sets the stage for what's about to unfold. Throughout the album's eight tracks (many of which blend together seamlessly), Luley's skills as a composer and arranger, guitarist and multi-instrumentalist are clearly at the fore; he plays all the instruments himself (a very long and impressive list) and sings all the main vocal parts, save a few supporting spots for additional vocals, chanting and concert harp. The percussive parts are primarily bells, tambourine, cymbals, and an assortment of hand drums, which together with the absence of any heavy rock guitar or drum kit, tends to give the proceedings a light and pastoral feel throughout, full of surreal mystery and textures that subtly hint at world styles. This is a thoroughly enjoyable concept disc, beginning to end, but I would be remiss as a reviewer to not mention how much this reminds of Jon Anderson's Olias of Sunhillow at many points along the journey; the overall feeling and inspiration are very similar, and for all who found Olias enjoyable, Sheepfather's Grove will surely be the ticket.