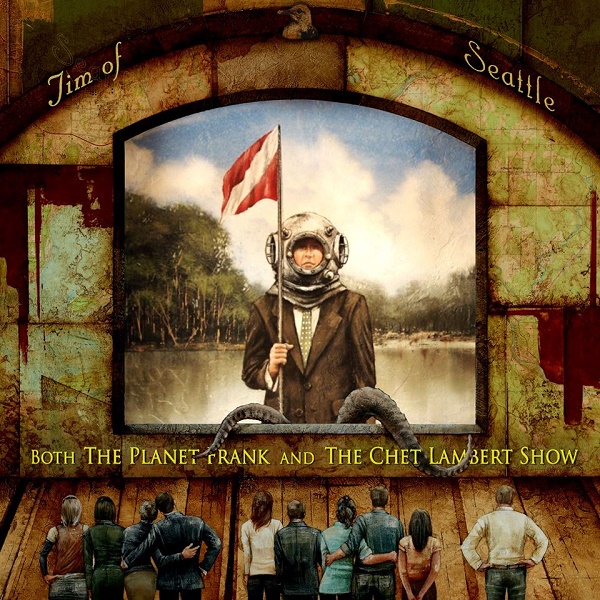 When we last encountered Jim of Seattle, he had presented us with the sprawling We Are All Famous, a collection of 19 tracks covering a wide stylistic range with humor and skill. With his new release, he gives us a similar musical range, though this time it’s in service of a story. Yes, this is a concept album, and like the best concept albums of the past, the story itself is convoluted and somewhat confusing. I won’t try to explain it other than to say the album title gives the basic outline, as well as describing the two halves that comprise the music. The spirit of an old-time radio drama is twisted into a trippy, even goofy series of vignettes and songs, sometimes with narration. Jim’s experience in musical theater is evident in the harmonic sophistication and flow, and to a certain extent even the stylistic variety. Many modern musicals will borrow elements of rock and roll, jazz, and cabaret freely, and Jim does the same. “We Are the Elders” has a 60s spy music vibe; “The Mathematics Lesson” has a breezy swing to it in spite of the fluctuating time signatures; “Witchita Lineman” is in fact a mashup of the country standard and Devo’s “Whip It,” with a few hints of “Working in the Coal Mine” to make it even crazier; “Travelling (The Battle of the Tapirs)” sounds like the exotic dance sequence from an old movie set in the Andes; “The Entertainment Parade” is an old-timey music hall waltz; “Storm” channels The Swingle Singers; and so on — the wealth of unfettered ideas is impressive. Once again, it’s a one-man show barring a few small contributions of others. It’s absurdly grand, and grandly absurd. Frank Zappa without the crudeness or musical indulgence, Lieber and Stoller crossed with Harry Nilsson and dipped in The Muppet Show, Henry Mancini viewed through a kaleidoscope, and many other incongruous and synesthetic metaphors. Jim takes the craft that went into making classic Broadway shows and applies it in service of his own wacked-out vision of a story. Both the Planet Frank and the Chet Lambert Show is an antidote to The King and I, Michael Bublé, American Gangster, and life in general.