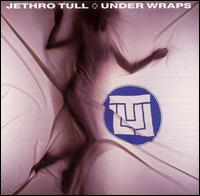 Jethro Tull has been with us now for 15 years or more. In this time, they have changed dramatically, from the late 60s folk-blues influenced rock, through their mid-70s elaborately orchestrated phase, to the concise electronic sound of Under Wraps. Leader Ian Anderson and guitarist Martin Barre are the only original(-ish) members left, but many elements of the old sound remain in spite of the superficial differences. Anderson still plays flute and acoustic guitar, though synthesizers dominate the sound of this record. As always, the focus is on Anderson's voice and the electronics are not allowed to get in the way of that. Martin Barre is one of the great underrated guitarists of rock music. He has always had a distinctive style and played more than competently. On this album he shines, with sizzling leads and imaginative background playing.