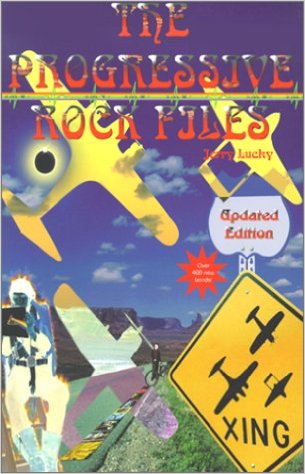 Lucky is a Canadian writer and music historian with a background in radio, and an observer of the progressive scene at large. In this ambitious revised and expanded third edition, he attempts to tackle it all within its 160 pages: defining what exactly progressive rock is, tracing its roots and historical development from the late 60s through the mid 70s and beyond, and attempting to analyze the causes for its demise. This is not a reference book as such (although there is a lengthy A-Z band listing with brief three to four line descriptions occupying the latter half of this spiralbound volume), it is better thought of as a reader, and one that can be highly recommended to anyone who didn't live through those early days of the progressive era. Lucky has written extensively on the relationship between the mainstream music press and progressive rock, citing numerous references from Melody Maker and other publications throughout the 70s.

In addition, Lucky supports his own work with excerpts from numerous interviews culled from Guitar Player, Record Review, Record Collector, Keyboard, Down Beat, and others, as well as several interviews he has done himself. These give his work a very objective feel, as he attempts to sort out the purpose and meaning of this branch of the musical tree. He seems to be a big fan of Yes, and others on the symphonic side of the prog-rock world (Camel, Genesis, etc.), or at least one would gather that based on the personalities he has chosen to quote from, yet the book does not ignore the balance of the big picture, and one would not read this volume and walk away not knowing something about Canterbury, zeuhl, and RIO, as well as the important developments that were going on outside of the UK. As Lucky traces the development of progressive rock, in a margin sidebar on each page he has listed what he feels are the most important albums of each year from 1967 through 1996.

One important essay within these pages is titled "Why Asia Missed the Mark," which deals with the attempt to take progressive rock, cut out all the 'fat,' and present it in a short song format with a more marketable pulse. Lucky hits the nail on the head with this one; in comparing the shallow success of Asia with the enduring success of Dark Side of the Moon, he says "Floyd were very successful, because as artists they first set out to please themselves and then their fans. They did not then and do not today bend over backwards to give their fans what they want, or what they think will make their fans happy... Now certainly, Pink Floyd wants their fans to enjoy what they hear, but that involves their fans keeping up with the band... very different from Asia, who on the surface appeared to try very hard to come up with something that pleased their following." The book is filled with numerous other essays dealing with similar types of material.

The back section of the book lists over a thousand bands and a brief description of what each one sounds like; in a forward to this listing Lucky notes that he has concentrated on the "Classical, Pomp and Symphonic" rock styles, and has a good many from the Canterbury school as well, but admits that the listing is far from complete, especially in the RIO, avant-garde, and fusion areas.

In summary, Lucky has done a respectable job here, this is probably something that should be required reading for everyone born after '64 who probably missed the formative years of progressive rock. And for those born before, the recap and analysis are well worth the price of admission.

The Insect Trust - The Insect Trust – This late-60s quintet from NYC epitomized the broad sense of musical experimentation of the era, pulling incongruent forms together, and through a combination of optimism and naiveté, managing...  (2001) » Read more