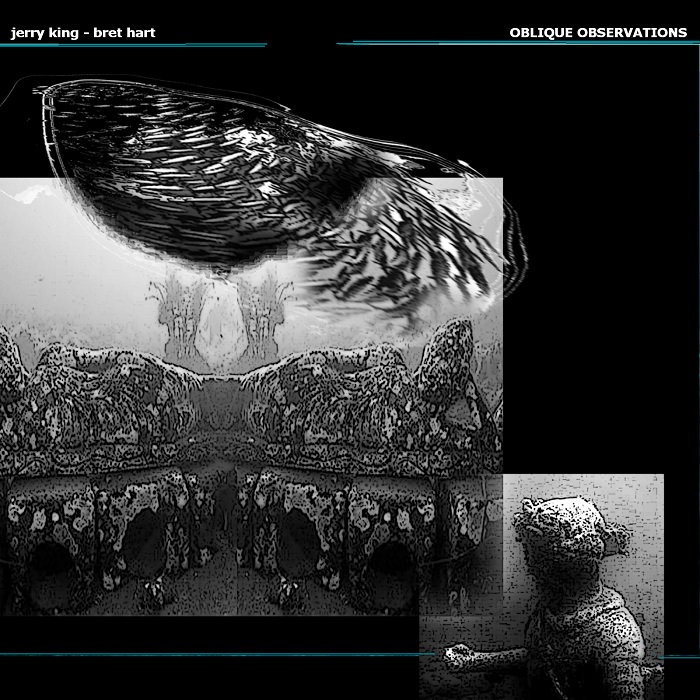 Jerry King and Bret Hart, both composers and multi-instrumentalists, are half of Moon Men. Hint: this sounds nothing like Moon Men, nor does it sound like Jerry King’s solo work or his band Cloud over Jupiter, nor does it sound like any of the Bret Hart solo material that I’m familiar with, which admittedly is only a small fraction of his work. That is to say, Oblique Observations is something new, somewhere they haven’t traveled before, but it’s something that adventurous listeners everywhere should hear. Hart is a master of many extended guitar techniques, so it should come as no surprise that he is the primary guitarist (electric, acoustic, ‘orbit guitars,’ loops and treatments and more), throughout the album’s ten tracks, and also offers some percussion, drums, and other unusual sounds. King plays bass throughout, as well as synths, drums, bongos, and even lead guitar on one cut. Their material is wholly Instrumental, and sounds primarily improvised, though both members of the duo seem well tuned in to what the other is doing at any given point in time, which for improvisation, is what makes it soar. They also have the good sense to cut it off before it goes on too long, with most cuts being somewhere between three and five minutes. You have some pieces like “Waking Up in a Canoe” that almost sound pretty close to a normal laid back composition, while others like “Goblins Brew Part 1” and “In Gornland” that call up all kinds of unusual sounds to mix together with a dark funky bass-heavy stew. “Emmett and Annette” opens with some unusual distorted voices that give way to unusual sounds that wander around for five minutes looking for interesting places to go. The longest track is “Climbing the Glass Trellis” at just under six minutes, and one of the best, exhuming all kinds of unusual sounds while Hart plays “ghost guitars” with a slide. Another interesting note is that the opening and closing tracks are both credited to the Blorpcasters, which in fact are just King and Hart, two moon men who eat blorp for nutrition and play their Telecasters; it’s an inside joke of course. In all, Oblique Observations has a lot to offer the intrepid listener looking to go well beyond the usual fare.