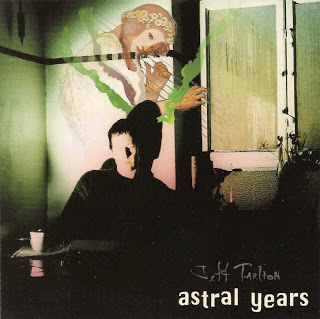 I would bet money that Jeff Tarlton sleeps with a book of Kirouac's poems in his arms and Morrisons Van and Jim on his turntable (c'mon folks, it is so hip to have vinyl). Tarlton is an American street musician living in Berlin who's come to the attention of the folks at Delirium and been allowed to record his song/poems for posterity. The 20 songs on Astral Years were actually recorded everywhere from Detroit to the Czech Republic, with a small army of guests. Most of what you hear, though, is Tarlton alone, usually accompanying himself on acoustic guitar, reciting his poetry, occasionally in verse as on "Beaconing," but generally in a kind of monotone delivery set to a drone backdrop. A few songs receive a fuller production, as on "Exceleration" and "I Wonder," but in general these are, as the liner notes put it, "sparse jewel set arrangements." That's a nice way to say that there ain't much to these songs. I'm sure they're minimalistic and short (typically two or three minutes tops) by design, but Tarlton is a bit too oblique for me. He obviously has a fascination with the trippy hippie scene of the late 60s even though I'm sure he himself is perpetually clad in black (It is Berlin, after all). The bottom line for me, I guess, is that if I want to hear mediocre folk music badly sung and played on a crappy old acoustic guitar I can go down to Santa Cruz to get a fix. One for the coffee house set.