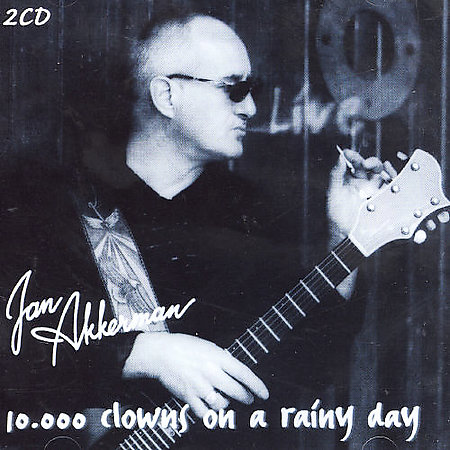 Word is out that Thijs Van Leer has reformed golden age prog band Focus with a flashy new lead guitarist. Clearly, where would Focus be without original shredmeister Jan Akkerman, who earned 70s AM radio attention for the frantic-paced novelty hit “Hocus Pocus”? The six string guitar slinger has since moved on into a jazz fusion vein while keeping a disappointingly low profile (at least in the US). Jan has only surfaced for a few international efforts including the European GuitarSpeak projects and tour almost a decade ago. So what’s he up to now, you ask? Dutch label Patio Music has released a new live album featuring Akkerman with a crackshot band in tow. And he’s reprised and reworked various Focus classics and kept the finessed playing intact. The two disc set cuts across performances from 1995-97, taking the best of newer pieces, and mixing and merging them with new arrangements of Focus material. The end result is a bluesy, rockin’, moody set of instrumentals blending old and new with a sincere depth. Disc one’s high point is the new arrangement of "Eruption," with Akkerman switching to acoustic guitar for the duration. Another track, "Puccini’s Cafe," is a somber blues slice of grace and quiet passion. Disc two is offset by a 17-minute medley including the hit "Sylvia" and seven other spirited pieces. Accompaniment is capably provided by Nico Brandsen (keyboards), Manual Hugas (bass), and Ton Dijkman (drums). A stateside release would be welcome for fans who appreciate a class ensemble playing in a small intimate setting.

Ian McDonald - Drivers Eyes – Let us take a long journey back through the ether to advent of progressive rock. Who do you see lurking around in the shadows? Well one person was Ian McDonald whose group, King Crimson, was a magic...  (1999) » Read more