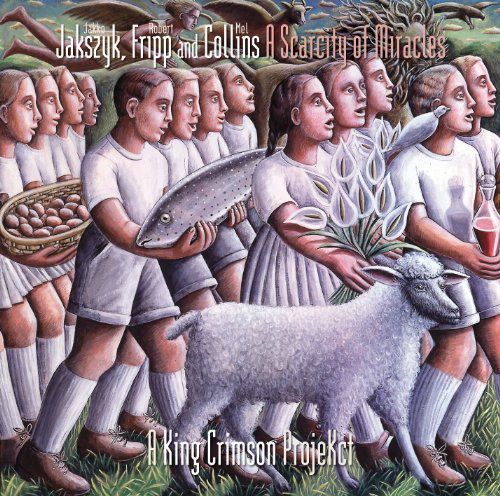 The first thing to say is that I really love King Crimson in all its incarnations. But it is not unconditional, unquestioning love; I do love some of the incarnations more than others. My main criticism of the last few iterations has been the lack of sonic variety. By focusing nearly exclusively on guitars, some of that wonderful varied palette found on an album like Larks' Tongues is lost when you're without violin, keyboards, saxophones, percussion, and so on to mix it up a bit. (The less said about the use of guitar synthesizers to emulate some of those other instruments, the better.) So I was looking forward to this release with some measure of hope — throwing Mel Collins in the ring with Fripp seemed like a fine idea. Jakko was somewhat of an unknown quality: although I've heard him appearing in a variety of contexts, none of them really gave me a clue what to expect from him here. It made sense to cast him in the "Belew" role, providing lyrics, vocals, and a contrasting guitar voice, and the fact that he plays keyboards leads to the hope of some tonal variety. But enough about expectations, on to the actual music. The good news is that the sound is interesting and varied, coming off somewhat like a collection of mellower Crimson tracks with a different singer. I'm reminded of Fripp's collaborations with David Sylvian in this, though with even fewer aggressive tunes. But I'm not going to insist on "Thrak" or "Red" over and over again, so the lack of jarring odd-meter dissonance isn't a deal-breaker. When this atmospheric approach works, as on the closing track, "The Light of Day," it's really wonderful. Jakszyk's massively harmonized vocals croon above a bed of Frippertronics and whatnot while Collins noodles around on the soprano sax. Lovely stuff. Where it doesn't work so well is on more conventional songs like the title track, which are reminiscent of No-Man. Here, we have what seems more like a middle-of-the-road AOR band with touches of Fripp guitar, and Collins' parts just bring to mind smooth jazz, which is not a good thing at all. To my ear, it's not often that a soprano sax carries enough expression to not just sound pretty. There have been precious few players who can pull it off. When he plays the alto, Collins brings a much more interesting flavor to the sound, but that is not often. This is my main disappointment with A Scarcity of Miracles — it's all too polite, too safe, too pretty to be really engaging. A worthy effort, but more grit please.