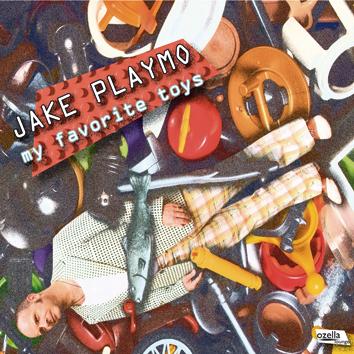 Who better to explore the concept of toys through music than someone named Jake Playmo? This is the German composer/musician/producer’s (whose real name is Jan Klare) attempt to broaden his audience beyond the jazz and theatrical realms he’s normally associated with. He’s assisted by his usual house band, Das Böse Ding (The Evil Thing), along with a variety of guests such as singer Katherin Mander and guitarist Serge Corteyn. As a sax player, Playmo weaves a merry trail through the eight songs, each given titles like “Matel,” “Ravell,” and “Barbie.” As I was listening through the album I kept drawing comparisons to Mats Morgen, who have a similar penchant for playful yet deft compositions that showcase superb musicianship while never alienating the listener. The production is adventurous, often mixing in samples from other media along with processed instruments to give the songs some interesting textures. The overall vibe is upbeat and bright with only a few deviations, such as the urgent rock drive of “Lego” and “Yps Gimmick,” or the introspective and contemplative mood of “Mb.” At times — and this seems natural — the pieces evoke the minimalist electronica of Kraftwerk, which Playmo and his cohorts employ to good effect on the closing track “Fischer Technik.” They really seal the deal on the deliciously jazzy “Barbie,” with Mander and Playmo both delivering superb performances. The whole thing ends on an appropriately playful note, perhaps inspiring the listener to reconnect with their inner child. It definitely leaves me hoping for more.