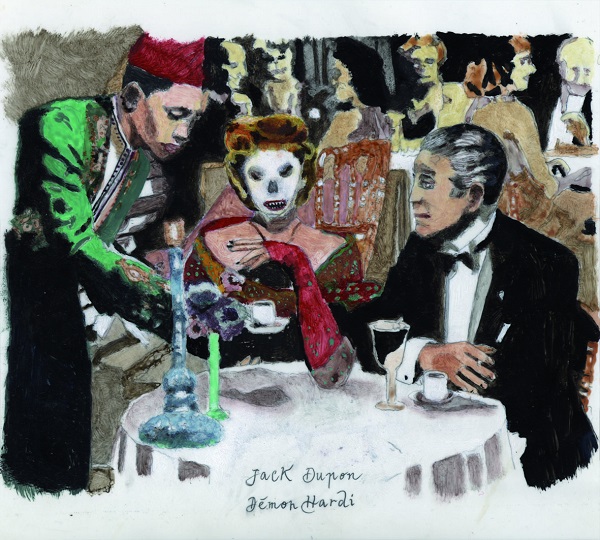 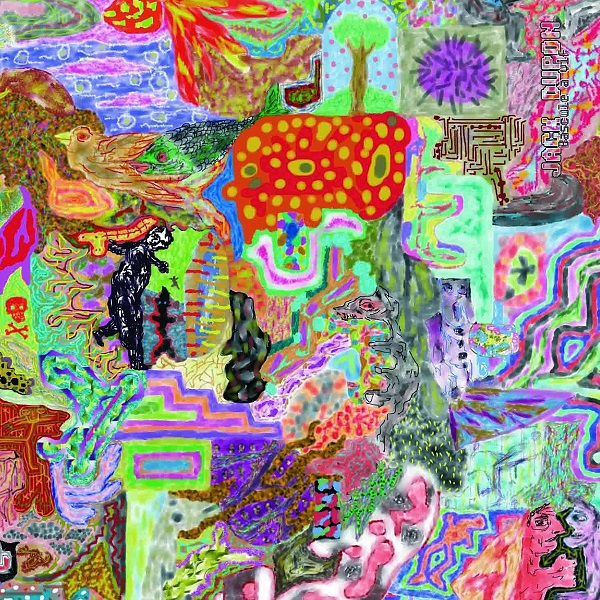 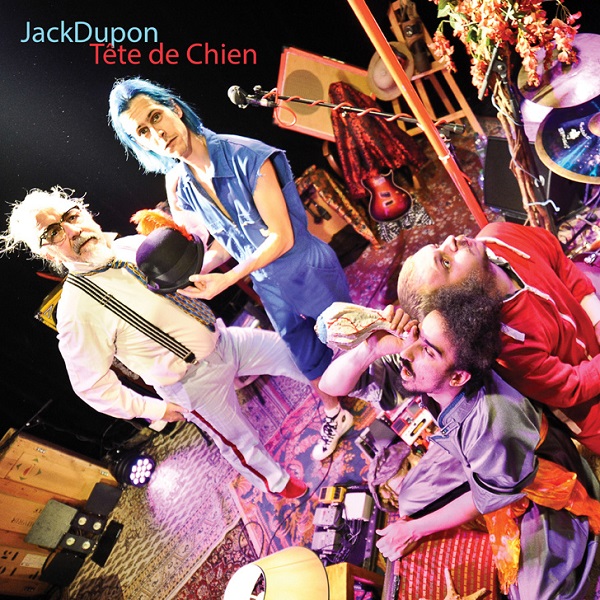 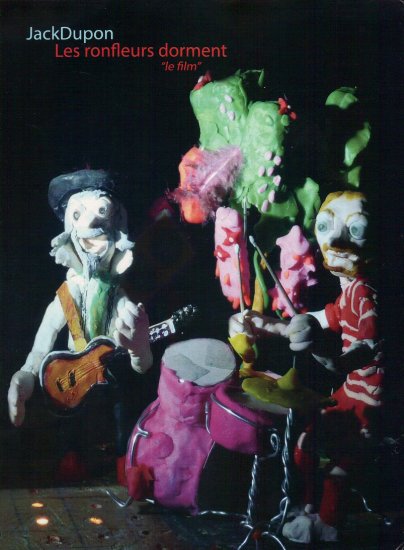 An up-and-coming four-piece from the Auvergne region of France, there is nobody named Jack in the band – kind of like that other band that has nobody named Jethro. Démon Hardi is the band’s third CD release, and their style encompasses a juxtaposition of avant-garde rock idioms, a variety of cool influences, and wacky lyrics (although I must admit my limited understanding of the French language puts me at a disadvantage here). In that latter respect one may sometimes be reminded of Etron Fou Leloublan, especially in EFL’s mid-to-later period, although Jack Dupon’s instrumental approach is entirely different (sans woodwinds, and with lots of guitars), embracing a more rock oriented mode, often taking their sound close to the various incarnations of King Crimson. Those guitars can be edgy and thrashy, or inventive and tasty, creating a confluence of madness amid shifting meter and blistering compositional complexity, bolstered by an incredibly tight rhythm section. For nearly a decade the band has been touring around Europe appearing at festivals, even undertaking a tour of the Eastern USA last year starting with an appearance at ProgDay in North Carolina. But one listen to Démon Hardi makes it crystal clear they will be right at home at this years’ RIO Festival. Jack Dupon is no longer just a ‘band to watch’ – with this latest released they have arrived.

I’ve been debating with myself about how I would review this collection of music, individual reviews or one combined review. Jack Dupon’s music is difficult to describe, so instead of repeating myself over multiple reviews, I am writing one big honking piece. Where do I start? Perhaps with my impression of the music. So take a quart of Les Claypool and Primus, a cup of David Byrne and Talking Heads, and a dash of Frank Zappa’s insanity and blend well. Then swirl in the French insanity of Ptôse and Sebkha-Chott, topping it off with a garnish of Der Plan imagery. If this makes sense to you, then you will have some idea of Jack Dupon. Jack Dupon is not a person, but a young French band consisting of four slightly deranged musicians: Thomas Larsen (drums, vocals), Arnaud M’Doihoma (bass, vocals), Gregory Pozzoli (guitar, vocals), and Philip Prebet (guitar, vocals) who play some very intricate, intelligent, and overall outstanding music. They have been playing and recording since 2004 and what I am reviewing here are their third, fourth, and fifth albums plus their first DVD.

Démon Hardi is a studio album, while Bascule à Vif and Tête de Chien are live recordings. Démon Hardi is a collection of seven songs that jump from rock to progressive rock to Rock in Opposition based on themes using counter melodies and polyrhythms performed by one or more of the band members. Taking pages from Fripp’s and Zappa’s books they improvise during their live performances and then rework the tunes in the studio until they get them right. The result is highly complex music. The opening track “Le labyrinthe du cochon” is a complex interaction of heavy percussion, bass, and guitar that starts off like Primus and then travels through King Crimson, Present, and Univers Zero territory. This is a highly energetic piece. Next is “Jeudi poisson” with references to Ptôse in counterpoint with melodic interludes, bass riffs, and eventually some melodic and happy circus-style music. This tune is a conglomeration of music and emotions. Then we encounter the relatively short “Sombre Traffic” with its childlike Pascal Comelade intro leading into melodic guitar. With the fourth track “Marmite” we are back firmly in Primus territory and possibly Heldon. Track five “Le Chateau de L'Elephant “ takes us on a different journey, this time to San Francisco psychedelia, reminiscent of Jerry Garcia and the Grateful Dead! “Cravate Sauvage” changes direction again to quiet ambiance and dissonant guitar. And the disc closes with another excellent Fripp/Heldon-influenced masterpiece “Oppression/Depression/Les Valeurs du Cool.”

Bascule à Vif, recorded live on October 22, 2011 in the Salle Camille Claudel in Clermont-Ferrand, France covers three tracks from their 2008 album L’Echelle du Désir and the entirety of Démon Hardi. The instrumentation is so orchestrated and the band is so tight, the only indication that this was a live performance is the polite applause at the end of each song. The high point of this set is the 32-minute “La secte des mouches, le sacre de la reine, mille millions de mouches molles.” It is on this track that the band outdoes themselves.

I hesitate to say that Tête de Chien is more of the same, as that sounds negative. In this case, this is a good thing! Another live recording of six new songs performed at Vichy’s Onze Bis in December 2013. The Tête de Chien tunes are split between three short and three fairly long tracks. Jack Dupon is on a mission to fully explore their musical topography. I do not necessarily detect evolution and growth between 2011 and 2014, instead it is as if they are leaving no stone unturned in their search for musical ideas. I highly recommend any of the three CDs.

Now to the DVD Les Ronfleurs Dorment. There are four basic modes for the DVD: Play, Chapitres, Love, and Live Solo. If you want to view the DVD performance in one sitting click Play, otherwise you can jump to individual songs or spots in the performance by clicking Chapitres. This is the same performance as the Tête de Chien CD, interspersed with eight short, stop motion/Claymation clips of the band transforming into odd, and sometimes hideous creatures, as well as treated video clips. The Love link is basically the credits accompanied by animation and mumbled voices. And sad to say, I did not watch the Live Solo video all the way through for comparison, but it appears to be the same Tête de Chien performance as the Play link but sans the animation and artistic videos. The DVD comes housed in a digipack without a booklet or any other identifying information, so that does make it challenging to know what exactly you are viewing. If you long to see the band perform in their crazy costumes, jump suits, sweats, etc., then by all means check out the DVD. If you are only interested in the music, stick with the Tête de Chien CD.

Lubimov, Trostianki, Rybakov - Misterioso – As part of ECM's continuing new music series, enter a semi-classical trio who embrace the quietudes of modern compositional expression with a keen sense of space and beauty by focusing on modern...  (2007) » Read more

Ray - Somewhere in the Universe – Ray is Ray Roehner on vocals, acoustic guitars, flute, and pennywhistle, John Berg on acoustic and electric guitars, and three other musicians on keys, bass, and percussion, with guests providing...  (1997) » Read more

Vangelis - 1492: Conquest of Paradise, Blade Runner, Voices & Oceanic – I had almost left the Greek hero for dead following 1987's Direct, but five years hence Vangelis managed to rekindle the magic spark, and 1492 was the album to do it. A soundtrack to another...  (1998) » Read more