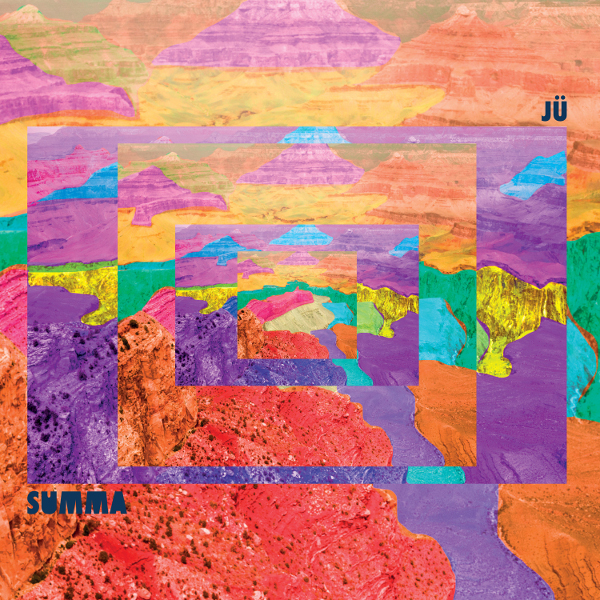 After the glorious noise that comprised most of Jü’s collaboration with saxophonist Kjetil Møster, I was expecting something similar from Summa. What I got was something rather different, but I’m a listener who likes it when musicians defy expectations, so that’s not necessarily a bad thing. Not that they’ve gone all easy listening — far from it — but there are more sections of building intensity than outright thrashing. The album starts out with a half minute of electronic fiddling before a drum pattern comes in, with Halmos András heavy on the toms providing a nice groove. The bass and guitar make indistinct noises for a while, and the bass joins in the rhythmic feel with the drums a couple minutes later. It sounds like a semi-structured improvisation, one where rhythmic motion takes precedence over melody. There are several stretches during the course of Summa where the musicians are playing sparsely, eking out dissonant, distorted sounds rather quietly. Guitarist Ádám Mészáros will play two clashing notes and let them ring out, an unsettling noise drifting into space. Ernő Hock’s bass is usually fuzzed, and he often provides more texture than harmonic content. There are notable exceptions, however. “My Heart Is Somewhere Else” is the album’s short rock tune, with fast riffs and an aggressive beat. “Mongrel Mangrove” also has a set riff, but it’s slowed down into the sludge range, plodding ominously. “Partir” features a couple of guests: saxophone from Kjetil Møster and electronics from Bálint Bolcsó. This lengthy track coalesces out of nothingness, and about three minutes in, you realize that a riff is taking form, loosely coordinated between the bass and sax while the guitar makes drifting noises. The piece ebbs and flows, slipping back into the void only to reemerge with the bassline, sometimes with the sax in the lead, sometimes the guitar. These are musicians not afraid to defy conventions, ready to explore unexpected places, and their music should appeal to listeners with a sense of adventure.