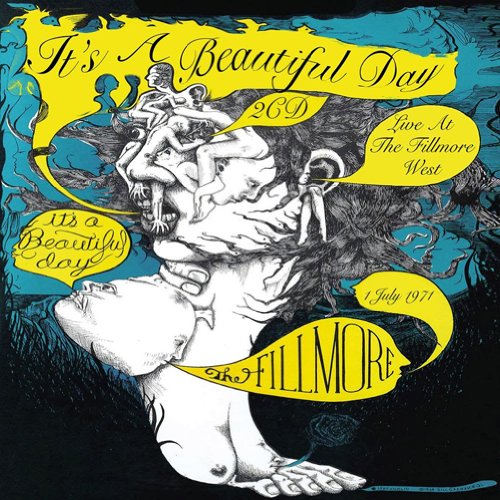 I remember around the time CDs first hit the market back in the 80s, I went out and bought a top-of-the-line Carver receiver, and figuring that I should modernize and be an early adopter to the new digital format, I bought the partner CD player to go with it. The horror came when I brought home a copy of KC’s Larks’ Tongues in Aspic disc, and it went silent for five seconds between the last two tracks where they should have run together! Soon thereafter, the new players stopped doing that, and as soon as I could muster up the cash, I replaced it. So what does that have to do with this expanded live set by San Francisco’s It’s a Beautiful Day recorded at the Fillmore West on July 1st ’71? You guessed correctly – there’s anywhere from five to ten seconds of dead space in the applause between every track on both discs, regardless of what CD player you use. Really annoying. This was one of a series of shows that ran for a week prior to the original Fillmore West closing its doors forever, and shows the band in excellent form in the months leading up to the release of their third album Choice Quality Stuff / Anytime; much of the material from that album is covered here, and of course being in front of their hometown audience makes the performance even more intense. So why does one need to buy this? You don’t, save your money and buy the Creed of Love CD on the Strawberry records label, which includes eight tracks taken from the same show, sounding much better, and fully sanctioned by the band. Although it’s nice to hear the other tracks that were played that night (“Place of Dreams,” “20/20 Vision,” “Hot Summer Day,” “Anytime,” “Hoedown,” and others), the shabby production of the CD only proves to me that this is nothing more than a substandard bootleg. Shame on you, Keyhole.