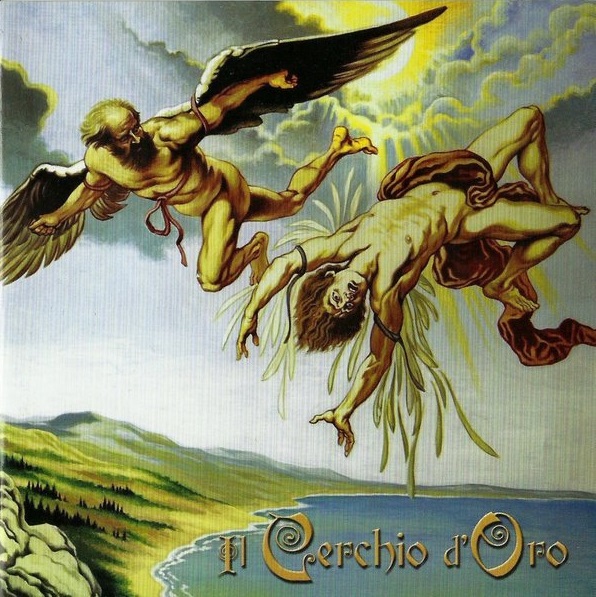 As most of us know from Greek mythology, Icarus made wings of red wax and flew too near the sun. The wax melted and he plummeted to his death. There are many meanings to this tragic story such as do not overstep your human bounds; and listen to your elders and do not become overconfident in your abilities. The Italian band Il Cerchio d’Oro, in the best traditions of classic 70s progressive rock, has just released a concept album setting this moral tale to music. Way back in 1974 the band started but did not achieve much success, never receiving a recording contract. They disbanded and over the years kept active, eventually reforming in 2006. Even though a couple of albums of unreleased music from their early years have been published, they released their first studio album in 2008, followed now by their second, Dedalo e Icaro. The band consists of its original members (Franco Piccolini on keyboards; Giuseppe Terribile on bass, acoustic guitar and vocals; Gino Terribile on drums and vocals; Piuccio Pradal on 12 string guitars and vocals; and Roberto Giordana on guitar) and Bruno Govone on electric guitar. In addition, for Dedalo e Icaro, Pino Simone from Trip, Giorgio “Fico” Piazza from PFM, and Ettore Vigo and Martin Grace from Delirium join them as guest musicians. The result is some of the best symphonic and romantic Italian prog you have ever heard. Heavy use of keyboards (organ, Mellotron synth, piano, etc.) recall the 70s without sounding derivative, though there is a strong resemblance to Le Orme. Highly recommended to all fans of the genre.