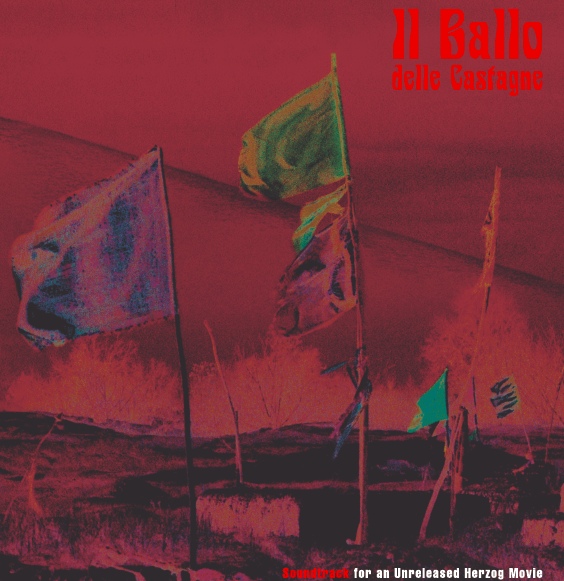 Il Ballo delle Castagne is an Italian band formed in 2007 by two musicians from different musical backgrounds: Vinz Aquarian (lyrics and vocals) and Marco Garegnani (keyboards, guitar, sitar, and percussion). The other band members are Diego Banchero (bass), Roberto Lucanato (guitars), and Jo Jo (drums and percussion). Their band name means The Chestnuts Ball and was inspired by a legend about Pope Alexander VI (1431 - 1503) and his “Satanic Sabbath” where naked women would dance in candlelight picking up chestnuts from the floor with their mouths. The music on Soundtrack for an Unreleased Herzog Movie is a based on demos they recorded and decided not to include on their previous two albums. For this new release, they decided to revisit and expand upon the demos. The album was originally released on LP and has now been remastered and expanded by two bonus tracks. The album title and the music is a quiet obvious homage to both Popol Vuh and film maker Werner Herzog, but with a twist. Il Ballo delle Cassagne’s gothic and dark sound intertwines with Popol Vuh’s spirituality. At times they flirt with Antonius Rex. The CD contains seven instrumental tracks. The opening track “In the Garden of Popol Vuh,” uses samples of ethereal female choir voices, harpsichord, and piano. The composition reminds me a bit of Popol Vuh’s Sie Still, Wisse ICH BIN. The second track, “Lentus in Umbra,” is a mixture of piano, harpsichord, and odd synth sounds for the first two minutes, then it takes on some form with a rhythmic sequence much like Tangerine Dream. Acoustic guitar and sitar join the mix and the music moves closer to Popol Vuh territory. Even though track 3, “Il Pianto di Cristo su Gerusalemme,” is about Jesus, the Italian narration / chanting and gothic sound reminds me of Herzog’s Nosferatu. This is a very strong instrumental that drifts far away from Popol Vuh. “Profumi d’Oriente” contains some Arabian themes and what sounds like Mellotron. Track 5 “Sicut in Caelo” is a minimal piece with piano and Italian narration that could have been included in a 70s vampire movie. “Il Sole Muore” opens with a beautiful cathedral organ. And the disc closes with “6:35 Minuten vor dem Ende der Zeit Explodiert die Erde,” a composition with strong Far Eastern influence much in the vein of Jade Warrior. The music on this disc is wonderful, but I think that they did themselves a disservice by the deliberate references to Popol Vuh as the music may not appeal to Florian Fricke’s fans.

Sky Cries Mary - Here and Now - Live 2005 – For those of you familiar with this Seattle band, you will remember that they disbanded after their 1999 release Seeds to pursue different musical ideas. For example, their female vocalist Anisa...  (2006) » Read more