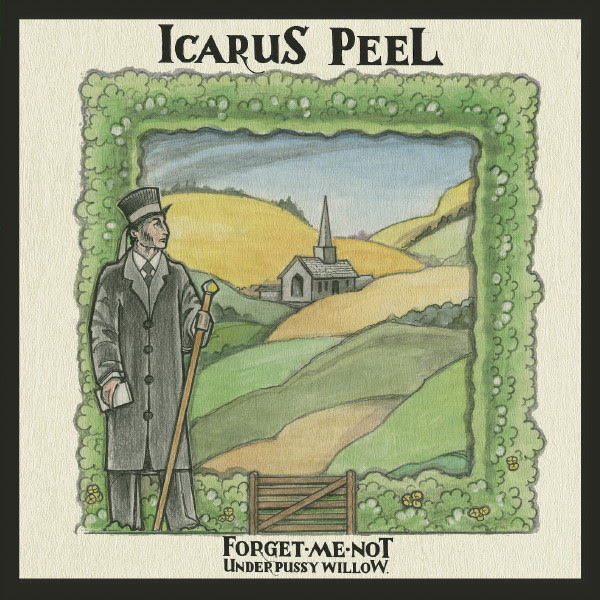 Icarus Peel, the leader of the UK’s psych sensations The Honey Pot, is releasing a new solo album this October, Forget-Me-Not under Pussy Willow. This is his fourth solo album and Mega Dodo is releasing it in two limited edition versions: 180 gram black vinyl of 250 copies and a 4CD set of 100 copies in a handmade wooden box. The 4CD set contains the new album plus remastered editions of his first three albums, Tea at My Gaffe, The Sunflower Army, and Sing! The new album is a bizarre concept album about an undertaker that Icarus Peel wrote as a bet. It is the classic story of good (the undertaker) vs. evil (a gang of villains from the smoke). This is a concept album like they used to make in the early 70s. Think in terms of the structure of Fire’s The Magic Shoemaker, Loudest Whisper’s Children of Lir, and Camel’s Snow Goose. Similarly on Forget-Me-Not under Pussy Willow there is an intermittent narration to tie the songs together. Overall the music is 45 minutes of fresh, upbeat psych with the occasional gothic psych tune across the 14 songs. I am also reminded, in concept only, of Chad and Jeremy’s “Rest in Peace,” but that was more of a protest song. Icarus uses a variety of instruments (piano, acoustic and electric guitars, keyboards, and sound effects) as well as Crystal Jacqueline on backup vocals. The entire album is excellent, and I find it hard to single out the high points. The music and story line is engaging. Other points of reference are Blossom Toes, Circus Maximus, Chuck Berry’s “Johnny B Goode” (of all things), Pink Floyd’s “Candy and a Currant Bun,” Free’s “All Right Now,” and a self-reference to Crystal Jacqueline’s cover of “Cousin Jane.” And the lyric from the final song, “Endings Happy,” will bring a smile to your face “If anyone knows anything about the end, it is surely an undertaker.” Forget-Me-Not under Pussy Willow is sure to please any fan of neo-British psych.