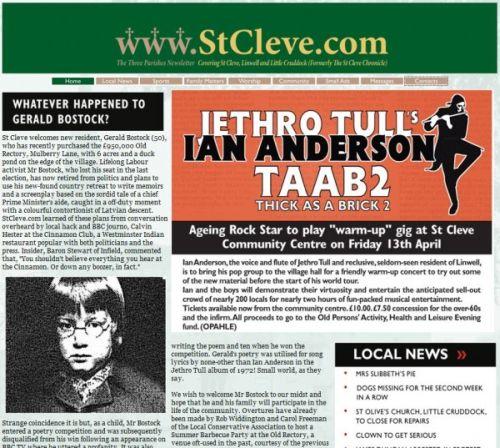 One might ask why a monumental progressive rock classic like Thick as a Brick needs a sequel at all, and if the sequel does any justice to the original. After 40 years, the answer to the first question is a resounding "no," but perhaps the second question deserves some thought. I don't know anyone who's lost any sleep over all these years wondering whatever happened to Gerald Bostock, the fictitious 10 year old kid that supposedly wrote all the lyrics of the original. It was a joke, for God's sake, we all knew that when we read the newspaper that the original album was wrapped in, so there's really no need to follow up on it. Nonetheless, TaaB2 examines what might have become of young Gerald's life (today age 50) by examining a number of possible paths he might have taken (for example: "Gerald the Banker," "Gerald the Military Man," "Gerald Goes Homeless" etc.). Wrap this up in an updated www.StCleve.com on the front and back of the CD Digipak, and there's your sequel. This is an Anderson solo album with a backing band of four excellent musicians, not members of Jethro Tull, yet the compositions and arrangements herewithin are pure Tull and could easily be outtakes or extras from any album from Benefit to Rock Island, and even features occasional themes from the original. Unlike the original, TaaB2 consists of 17 discrete songs, although they flow together seamlessly. It's an excellent album, but how can it possibly measure up to the genius and impact of the original? The bulk of the bonus DVD contains 5.1 surround sound and 24-bit stereo mixes, plus a 30-minute "Making of..." video and interview. The audio disc by itself is also available in a 'standard edition' jewel case version.