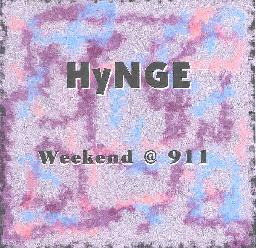 HyNGE are a band to watch out for. On this EP alone (the title refers to the recording studio these tracks were laid down at), they demonstrate an impressive talent for inventive instrumental composing and arranging. The trio (Doug Michael on guitar, Rob Rosen on bass and keys, and Dan Buch on drums) are comparable either to the short lived Polytown combo of several years back that featured David Torn, Mick Karn, and Terry Bozzio, or to Djam Karet. As with Polytown, HyNGE often eschews traditional rock approaches, instead taking the road less traveled, as seen on the tracks "Detour" and "Nightcrawler." Here, the instruments adopt angular patterns, weaving a seductive web as they go. Elsewhere, songs like "Hologrammatical Human" and "Torgo's Revenge" bring Djam Karet strongly to mind. The guitar work is excellent, sometimes heavy and sometimes delicate, laid over superb bass and tasteful percussion. The entire band does a great job throughout but I'm particularly impressed by the attention paid to percussion texturing, no doubt thanks to Buch. At times he reminds me of Bill Bruford and at others like Ginger Baker, especially with his work on the toms. It just goes to show there's no reason that the drum position in a group can't contribute as much as the others. Considering Djam Karet's semi-retired status, it's nice to see other groups plying the same path of creative, inventive instrumental music. I eagerly look forward to what this trio has to offer in the future.