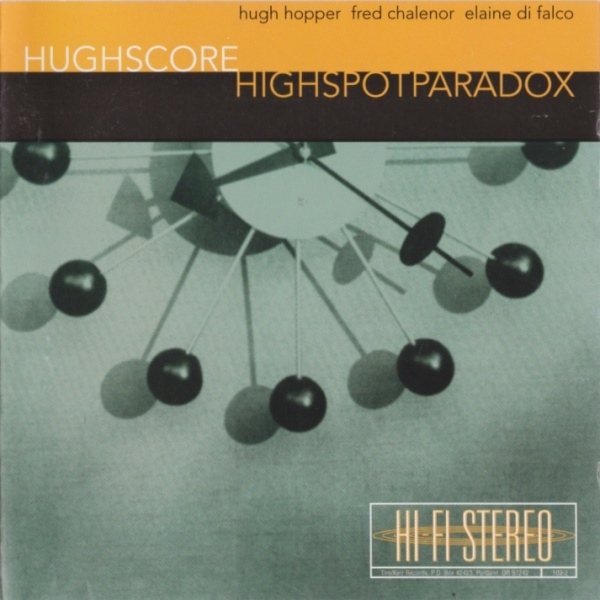 Ex-Soft Machine bassist and composer Hugh Hopper steps out again in another of his many group collaborations, this time with Portland based Caveman Shoestore (Elaine de Falco, Fred Chanelor). This is the second collaboration between these players and for my ears, the best to assimilate. How, you might ask? The compositions appear more comfortable and natural flowing due to a more familiar interaction between players. Maybe it's also due to some sympathy between players and to the material. Producer Wayne Horvitz (former keyboardist with New York based band, The President) has improved highlighting the subtleties between players rather than with odd instrumentation. The set opens up with a sensitive cover of Hopper's "Miniluv" track, originally from his album 1984, but this time with a more sympathetic contribution in particular from french hornist, Jen Harrison. Hopper's bass has been cleverly modified to sound at times like lead guitar, and at other times as a dissonant counter melody carrier. Memorable tracks include "Against the Wheel" which is kind of like if Jane Siberry or the Roches sang on a few tracks from Soft Machine 6. Vocalist di Falco's use of un-modern keys is a real strength for the album. Her replacement of accordion for keyboard accompaniment makes the disc almost have a French sidewalk cafe quality, but without some of the silliness which sometimes appears. The Soft Machine moody motif is ever present throughout the disc making it extremely satisfying if you like variations on the more quirky jazz explorations by the band. At its worst the disc becomes a bit tedious part way through if only some of the intended mundane tone of the songs.