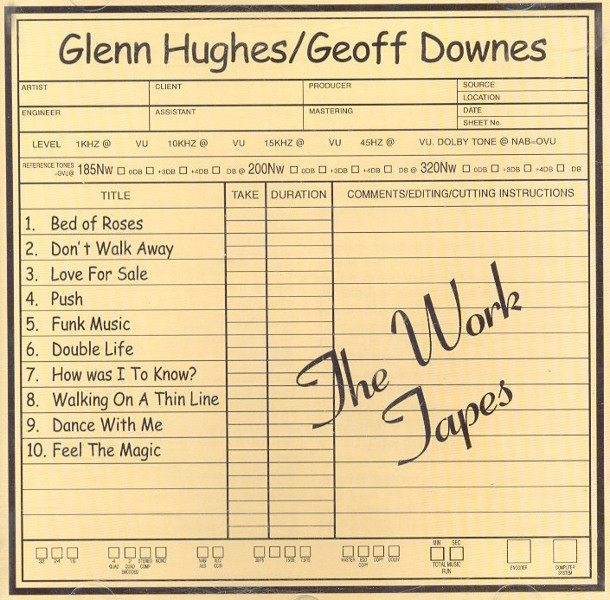 Leave it to Geoff Downes to seek out another bassist, vocalist heavyweight talent as a possible big time collaborator. I honestly don't think the ex member of the Buggles and Yes has ever lived down the mistake of giving fellow Asia member John Wetton his walking papers. On the other hand, Glenn Hughes has a longer career path starting from Trapeze to his high profile replacement role in Deep Purple (taking over for Roger Glover). Mutual friend Pat Thrall intoduced the two players in 1990 and dicussions began on what has become known in bootleg circles as the The Work Tapes. The ten tracks explore the more soulful side of power ballads as Downes fills the foundation role more than adequatley on "Don't Walk Away" where Hughes gives his utmost blues rendition ala Percy Sledge. Since most of these tracks have the barest accompaniment (synth and drum programming), they are stark renditions of raw ideas direct from the joint composer's muse. The funky side of things is explored by a few songs including "Push" and obviously "Funk Music" with its ascending bass line. At times it seems you could be listening to a late 80s female vocalist soul album by Whitney Houston or even Michael Bolton. Due major label ineptitude, this earmarked set has never officially seen the light of day until rescued by Rob Ayling's foresight. Fans of Asia will realize the implications, but in the hands of an informed label rep, these sessions could have been platinum ten years ago – but then again, maybe not.