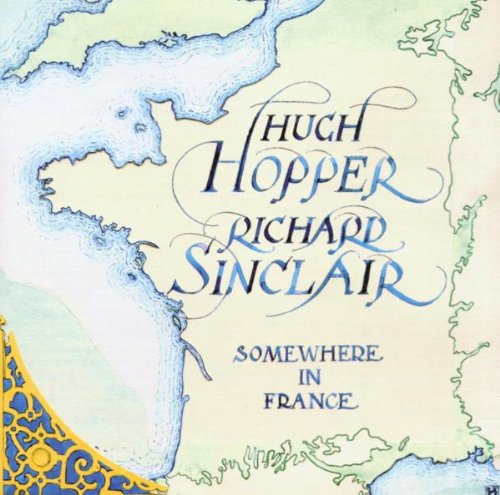 Voiceprint is still hard at work unearthing half completed projects and one off collaborations of which Somewhere in France fits nicely. Caravan and Hatfield vocalist and bassist Richard Sinclair had just completed work on Alan Gowen's last project, Before a Word Is Said (reviewed in #11). Hugh Hopper had also completed work with Gowen on Two Rainbows Daily and performed some additional improvised work with him (also reviewed this issue) before he passed away. Then the two members of the Wilde Flowers had also been threatening on working together for over ten years, but opportunity only knocked in 1983 for Hugh to invite Richard over to check out some songs he had written. The results are mixed, but endearing since all of Richard's songs come off little more than rough demos in need of some major shoring up (especially "Videos," which suffers from lyrical rambling). In fact versions included on Richard's solo albums are all better defined, though the Caravan auto-biographical piece, "Only the Brave" I still quite enjoy here in earlier form. It is the unreleased Hopper-penned pieces which are intriguing though. A lot more work was put into these tracks, especially with lyrics and arrangements where Hopper and other collaborators excel. "Long Lingers Autumn Time" starts off with Richard's choirboy vocals and changes into a memorable vocal line over Hugh's imposing fuzz bass. "Potted History" tells a tale of Richard and Hugh's parallel musical history. "Cruising the Eastern Sky," "Solidarity," and the acoustic "Colin-A-Dell" all make the disc well worth adding to your now oversized Canterbury collection.