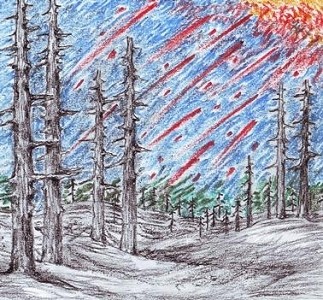 Maybe it's actually easy to make post-rock music. After all, there seem to be bands springing up all around the world playing it. Hua Lun are part of the new generation of Chinese bands following in the footsteps of Mogwai, Mono and the rest, and probably most pertinently countrymen Wang Wen. As with many of the others, they take a medium slow tempo, start out quietly, and slowly build up to a loud climax. They stick almost exclusively to their basic lineup of two guitars, bass, and drums, and it is the guitars that take the lead. Generally at the start the guitar has a clean sound and by the end are distorted and wailing out a melody with fast tremolo picking. One unusual choice, and probably the highlight of the set, is their version of "Takeda no komoriuta," a famous Japanese lullaby. It opens even more quietly than most other tracks, with a folk-oriented solo guitar part. Of course, by the end, the other instruments have joined in and the lead guitar is applying the tremolo technique to the melody. To be fair, this technique is used on several traditional Chinese instruments, so I shouldn't berate them for applying it to the electric guitar. A touch of subtle keyboard shows up in the final track, the set’s longest at 14 minutes. I don't really think this music was simple to produce – it's too good to be anything but the product of real talent.