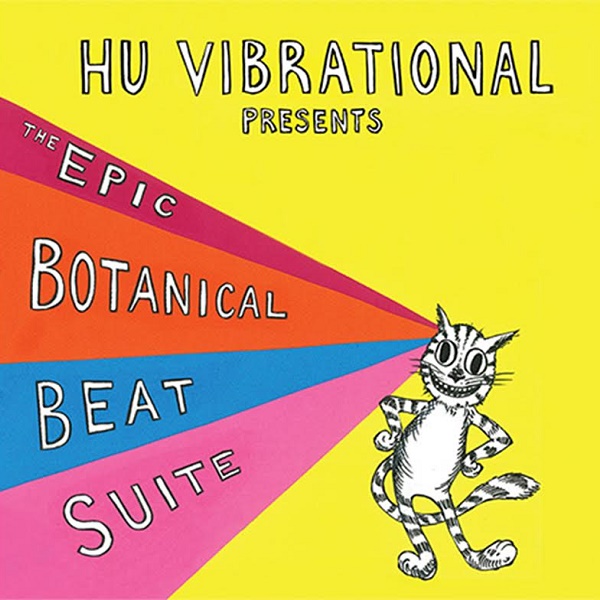 A band featuring seven percussionists might be expected to be a veritable groove-fest, full of propulsive rhythms. In the case of Adam Rudolph’s Hu Vibrational, that expectation would be somewhat confounded — this is a surprisingly atmospheric and spacy set of tracks, generally not danceable. One thing that stands out is the absence of the standards of latin percussion: no congas, bongos, or timbales. Frame drum, djembe, and cajon are the most widely known items in the credits, and beyond those lie a dozen or more instruments from around the world. In addition to the platoon of drummers, four guests provide other sounds. Eivind Aarset plays very atmospheric guitar, hardly ever playing recognizable notes; Steve Gorn plays bansuri flute; Alex Marcelo handles electric piano (like the guitar, more texturally than harmonically); Bill Laswell lays down some bass, but you’ll find none of the heavy tones he’s known for. The lack of a kit drummer, or even other percussion instruments that perform the functions of bass drum, snare, and cymbals, lends a certain gauzy sheen to the sound. The low resonance of the cajon (and who knows what other instrument) is very different from the punchy impact of a kick drum, taking us further out of the realm of typical percussion-based music. The really amazing thing is that even with seven percussionists, the overall sound is pretty sparse, even to the point where you wonder how many of them appear at any given time. In general, percussion rarely gets to step into the spotlight, being relegated to a supporting role, but Hu Vibrational turns that paradigm upside down in a refreshing way.

Fish - Fellini Days & Nights, Sashimi & Suits – Fellini Days is the ex-Marillion singer’s tribute to famed director Italian Federico Fellini best known for his avant-garde films such as La Dolce Vita and Satyricon. The director himself was a...  (2006) » Read more