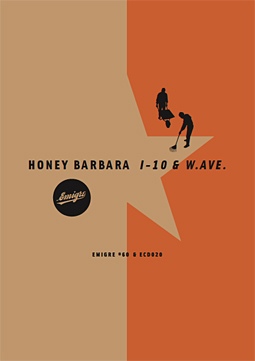 Singer/songwriter Ross Marlow’s conventional set of pieces with cohort James Sidlo (DreamLand) is called Honey Barbara. Together with drummer Lisa Kuehl and various guest artists, this trio has crafted a set seventeen pieces that pull on the recent US/UK resurgence of psychedelic pop begun in the late sixties. Honey Barbara take the less traveled mode of indie rock with a swaying twist on T. Rex (Marc Bolan) mutated with groups such as the early Pink Floyd. The album’s opening track, “Famous Animal,” is driven jointly by backwards guitar and tom tom drums and a Syd Barrett vocal delivery. “Beddie-Bye” pursues a danceable groove after a spacious intro that is done well, but less interesting. “Killer Duds” opens with vibes and a steely auto-harp introduction before Marlow croons about how good his threads look at a party. Other notable pieces include “Come Away,” which relies on a lounge lizard style percussion backdrop to softly spoken lyrics regarding loose imagery until the scary solo break section. Closing out the disc is “Renata,” a tribute piece where a subdued mode of operation is at work; the results not far removed from Brian Eno’s work from Another Green World or David Sylvian’s work with pedal steel icon BJ Cole. Overall the work shows a myriad of influences that are both embraced and distilled, thus stamping the band as a modern hybrid not easy to pigeonhole.