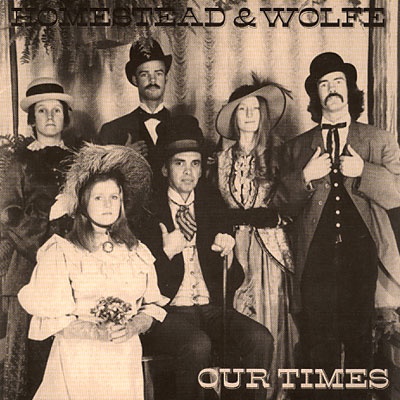 Homestead & Wolfe represents an obscure bit of early 70s Bay Area music history. The name refers to the location of the church in Cupertino, California, where this group formed out of a youth music ensemble under the guidance of Ernie Bringas, himself once half of The Ripcords who enjoyed several hits in the early 60s. Parlaying his industry connections, Bringas arranged for H&W to record with the aid of some of L.A.’s then top session players, including drummer Hal Blaine. From a songwriting standpoint the material here is typical for the times, ranging from the gentle folk of “Love Comes through My Door” to the peppy “Roll on, Tumbleweed” to the quasi-protest folk rock of “Your Freedom’s in Question.” Several songs take on a country vibe with the aid of Jaydee Maness’ pedal slide work, while others echo Mamas and Papas-style pop that had yet to go out of style even in 1973. The listener will have to suffer through a few clunkers, such as the Native American paean “See the Children Die” and the amateurish “Beat of the Drum” that are the kind of thing you’d expect from the Brady Bunch. These low points are offset by fine vocal performances throughout. JoAnne Avery and Janice Gundy share most lead vocal duties, Avery possessing an amazing soprano in the mold of Joan Baez while Gundy’s alto immediately recalls Karen Carpenter’s rich delivery. It may not have aged well, though this album still captures some musical magic from a turbulent time.

Steve Roach - Fever Dreams III – For the third in this series, Roach has served up a double dose. Like much of Roach’s material, the Fever Dreams series embraces soundworlds of a floating ambient nature, but with a somewhat...  (2008) » Read more