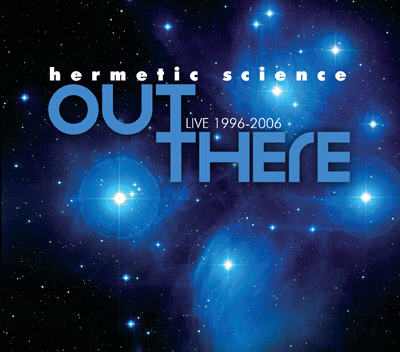 Ed Macan is a professor of music at College of the Redwoods in Eureka, California. The sprawling campus is hard to miss as one drives through Northern California on US highway 101. His idea in creating the band Hermetic Science in 1995 was to create a performing apprenticeship program (a band) for stundents under his leadership that would record and play out regularly, preparing them for a music career that would follow their college years. Macan also wanted to explore the possibilities of using mallet percussion instruments (vibraphone, marimba, etc.) in a progressive rock environment, which at that point had very little representation in the genre (one can count the progenitors on one hand: Frank Zappa, Pierre Moerlen’s Gong, and Canadian band Maneige come to mind, there are probably a few others…) and lastly, Macan sought to create progressive music that opened up new ideas and possibilities, not just something that copped the existing sound of the progressive rock pioneers of the past. Hermetic Science was conceived as a power trio of drums, bass, and mallet percussion, although in their later years piano, organ, and synthesisers were sometimes used in place of the latter. After a couple years, the first album Ed Macan’s Hermetic Science debuted in 1997, only a few months after Macan’s scholarly treatise titled Rocking the Classics – English Progrssive Rock and the Counterculture was released. In May 1997 the group featured Macan, bassist Andy Durham, and drummer Joe Nagy (although some cuts on the debut album featured an even earlier lineup of the band), and the Macan-Durham-Nagy is the one featured on the first eight tracks of the first disc of Out There, recorded at the College of the Redwoods Arts Festival on May 3, 1997. This set features four Macan originals, as well as adaptations of material by Curved Air / Darryl Way (“Cheetah”), ELP (“Infinite Space”), Cal Tjader (“I Showed Them”), and Gustav Holst’s “Mars, the Bringer of War” from The Planets, one that had been done in rock versions previously by both King Crimson and Love Sculpture (and possibly others), but never with vibraphone as the lead instrument. The earliest recordings on this set are from a KHSU radio show from about a year earlier, featuring Macan, drummer Michael Morris, and bassist Don Sweeney, where they perform the aforementioned Tjader tune, plus an impressive version of Dave Brubeck’s “Blue Rondo à la Turk.” It’s worth mentioning that all of the players in Hermetic Science received academic credits for their participation in the band. The entire second disc of Out There is a show from February 4th, 2000, just a few months prior to the recording of their third studio album En Route featuring Macan, drummer Matt McClimon, and bassist (and pianist) Jason Hoopes, who has since gone on to The Atomic Bomb Audition, Jack o’ the Clock, The Fred Frith Trio, and many others. The February 2000 set recorded at the Lakeview Room in Eureka featured six Macan originals, Aaron Copland’s “Fanfare tor the Common Man,” Rush’s “Jacobs Ladder,” as well as the aforementioned “Infinite Space” by ELP and Holst’s “Mars,” which over the three years since the earlier set had grown in intensity, with Macan now playing synths and organ throughout the eight-minute piece instead of mallets. Finally, sandwiched between the 1997 live set and the 1996 radio set on disc one are two rehearsal versions for “De Profundis” and “Voyages” from 2006, both Macan originals, which opened Hermetic Science’s fourth and to-date final studio album These Fragments I Have Shored against My Ruins, featuring Hoopes along with drummer Angelique Curry. This two disc live set is a powerful reminder of the excellence of this band at several points during their twelve year trajectory.