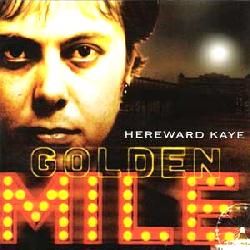 Singer/songwriter Hereward Kaye is something of a mystery even in his homeland, the UK. The artist has crafted thirteen pieces somewhat reminiscent of Elton John's renaissance era with a style coined on 80s pop stardom. After getting stiffed from a big time recording company, these polished sessions languished for several years before Voiceprint picked up the disc for release. Accompaniment is provided from two separate rhythm sections: one featuring one-time Brand X drummer Preston Heyman and noted gay activist Tom Robinson on bass, and the other belonging to Steeleye Span (Nigel Pegrum and Rick Kemp). Golden Mile is a David Hentschel production so there is a bit of that Genesis Duke era sheen on several of the pieces (as heard on "Don't Make Me") which covers the pop side of the tracks. The title track along with several pieces have that high radio profile quality about them but based on a songwriter's skills rather than overt singer or performer (which is not a bad trait). "Barnado" is perhaps one of the most noticeable tracks (and my pick for that elusive single his label couldn't find). Formerly from the early 70s band Café Society with Tom Robinson, Kaye recorded only one album with them before stepping out on his own. Kaye's own account of his brief exposure to stardom is excruciatingly detailed in the liner notes: another avowed victim of label re-prioritization. Overall it's not a bad set of songs for an unsupportive industry, but it's someone's singer/songwriter treasure once properly introduced.