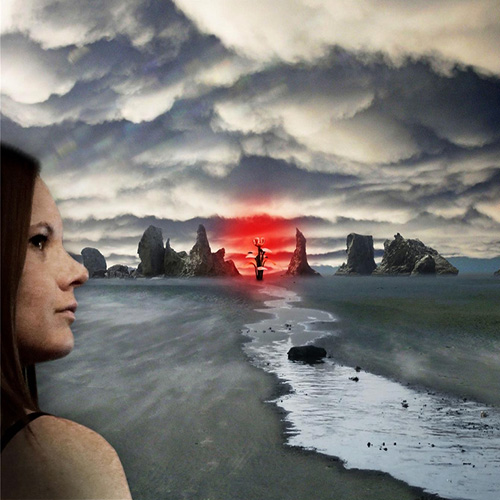 Three times is the charm, or so it seems for Herd of Instinct’s third full length album, which is nothing short of a Stick player’s instrumental dream with dual keyboards adding a new dimension to the band’s overall sound. The complex textures, polyrhythms, and lavish instrumental densities are woven into all of the ten memorable band-penned compositions, each one featuring powerful melodic savvy and a seemingly natural disposition to groove. Since 2013’s Conjure the band lost two founding members, drummer Jason Spradlin and guitarist Mike Davison, leaving multi-instrumentalist Mark Cook the only original member remaining. But the shake-up (which occurred gradually throughout the interim) has been good for them, resulting in new members Rick Read (Chapman Stick, bass, and bass pedals), Mike McGary (keyboards), Gayle Ellett (of Djam Karet, playing mostly keyboards and some guitar) coming on board, with drummer Ross Young playing on most of the ten cuts, Bill Bachman drumming on the others. Guest players Bob Fisher (flute and sax) and Stephen Page (violin) contribute generously throughout the set list. A cut like “Gridlock” is bound to remind the listener a little of 80s King Crimson with some middle-eastern influences merged in with both sax and violin in attendance; when the synth played through a vocoder takes a solo, the result gets is pretty cool all around. The mighty Mellotron is used extensively on numerous cuts, as well as other vintage sounding keys (Hammond organ, Moog, bass pedals, and more), but more than anything it’s the dueling Chapman Stick, guitars, and Warr guitar that provide the solid backbone for most of what’s here. There’s an amazing amount of variety herewithin, both in the structures and arrangements, making each piece a unique statement. In short, with Manifestation, HOI has topped all their previous efforts!

The Aaron Clift Experiment and Herd of Instinct played some gigs together earlier this year and Aaron encouraged them to play at this year's Voyager Festival in Austin in September. I was blessed to witness their mesmerizing performance. I was familiar with their previous release, 2011’s self-titled CD, and 2014’s side project Spoke of Shadows. But I had not heard their new album Manifestation. Though Peter Thelen reviewed it earlier this year, I wanted to contribute my views. The music on Manifestation contains ten different, complex, and intelligently orchestrated instrumentals. Different themes interweave creating a very interesting and enjoyable listening experience. I spoke with Mark Cook, band leader and Warr guitarist, after their performance and being a quiet humble guy, he seemed a bit embarrassed when I called his compositions intelligent. Mark is quite the virtuoso Warr guitarist, but he claims that he is still learning the instrument. You do not realize what is happening by listening to the disc, but watching Mark play live, you soon discover that he is playing two different melody lines, one with each hand, on this tapped guitar and controller. In addition to Mark, bass and Chapman Stick musician Rick Read enhances the complexity of the compositions. There is more than a passing reference to Robert Fripp and King Crimson on many of the instrumentals. And remote band member Gayle Ellet (Djam Karet) provides Mellotron and the subliminal Sci-Fi touches. There is some diversity between the different tracks. Interspersed between the Frippian compositions are some funky bass lines, the acoustic guitar and ambient electronics of “Baba Yaga,” the dissonance of “Saddha,” the eerie “Nocturne” that stands alone, and the upbeat “Time and Again” with some cool organ sounds, possibly Hammond. All in all an excellent album, and if you do have the opportunity to see them live, do not pass it by.