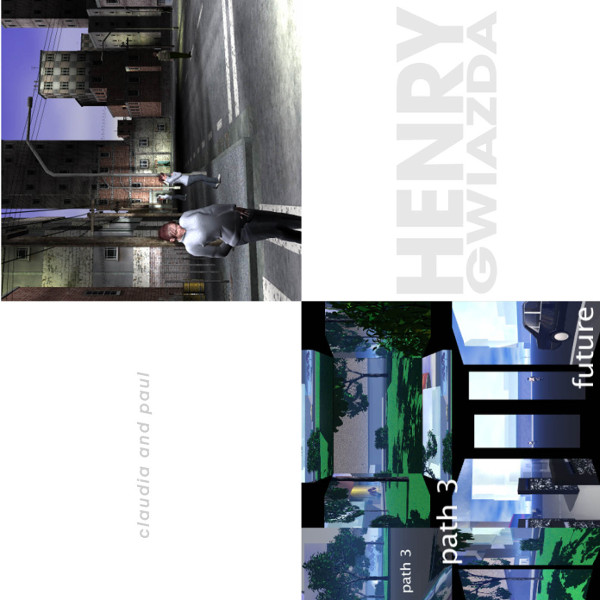 This audio-visual work is constructed from hyper-realistic depictions of populated and empty urban landscapes. Repeated stills with captions and numerals or replays of simple events seem like a video game developer’s work file or police forensic tool. But during a slow immersion in the 11 segments of Claudia and Paul, Gwiazda’s intention emerges. Everything is an event. A woman scratches her forearm while waiting for a bus. Clouds darken a fire escape landing. A car turns right at a stop sign. A dog crosses a street as the lights flicker. Everything reminds us of the level of attention we give our own surroundings. In “A Doll’s House Is...” we see cutaways or multi-panel views of apartment buildings, showing people in private or solitary moments, unaware of the noises, movements, erotic display or sheer tedium in the neighboring boxes. “...Is Consciousness” poses the question of being aware about everything all at once. Then comes a series of split-screen, multidirectional views of a single motion: making a U-turn in an intersection, crossing a city park, watching surfers at an urban beach. As a postscript, “Claudia and Paul 2:13 a.m. Audio Version” shows a static screen while a man’s voice describes in exhaustive detail the experience of watching two people standing in the street at night, a witness withholding interpretation and judgment. It’s a lot of attention paid to not much at all. Yet this is our world, consciousness in its most essential form, stripped of the meaning we bring.

Magus - Lucid Dreamer – Lucid Dreamer is a compilation of tracks from the 1997 album Traveller and the follow-up Highway 375 EP, remastered for the fuller sound that Magus guru Andrew Robinson intended. Also included are a...  (2006) » Read more