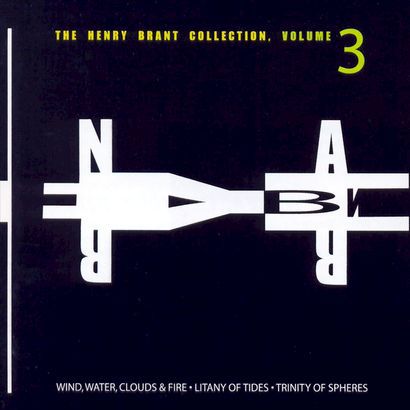 With many of the great modernist composers now quite advanced in age, it seems incredible that some people predating the movement might still be creating new works. The venerable Henry Brant (b. 1913) composes “acoustic spatial” music, often requiring multiple orchestra or ensembles positioned strategically around a hall, and never with amplification. Antiphonal music for multiple ensembles actually dates back to the Renaissance, so in a way Brant could be considered an ultra neo-classicist. Three compositions make up the latest Innova collection of works. “Wind, Water, Clouds & Fire” is 35-minutes long, performed principally by the Present Music Ensemble (whose Haunted America I reviewed for #29), along with the Milwaukee Youth Symphony Orchestra and four vocal ensembles. Many higher pitches are used here; exotic timbres like piccolo trumpet, an Eastern sort of exoticism, the mixing of tonal colors reminiscent of Ravel, soft chanting vocals as in a ritual. Something like George Crumb, or maybe Opus Avantra if you insist on a progressive connection. “Litany of Tides” features a large orchestra, small orchestra, solo violinist and four sopranos. The individual parts are more independent of each other in this piece, so that the listener can somehow choose what they experience by what they pay attention to; it’s a bit like John Cage’s “HPSCHD” in that respect. “Trinity of Spheres” uses the same strategy, but with three separately conducted orchestra. The orchestral writing brings to mind Ives, fitting for a composer continuing the American classical tradition solidly and without fanfare.