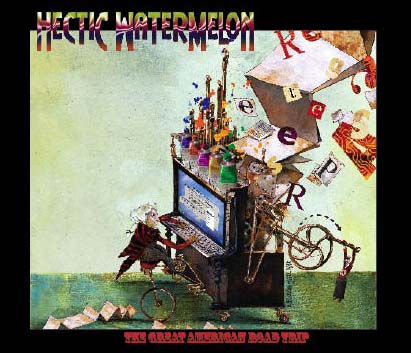 Hectic Watermelon is less a band than a solo project built around the talents of guitarist John Czajkowski. For this album he's assembled a capable trio to back him that includes bass (Harley Magsino), drums (Darren Debree), as well as legendary fusion violinist Jerry Goodman, who contributes his usual top notch playing to nine of the album's 11 tracks. Czajkowski is a versatile and multi-faceted player, though he sticks primarily with electric fusion-rock guitar throughout the album. Stylistically he covers the usual, from Eric Johnson's "clean Strat" sound, to Steve Morse's "country boogie" style, to Steve Vai's "strangled metal" style, with nods here and there to everyone from Jeff Beck to Alan Holdsworth. Clearly he's studied every big name guitarist to come along in the past 20 years and can pull whatever style is demanded of him out of his bag of tricks. The arrangements — all instrumentals except for the Adrian Belew flavored "Twenty-First Century Visigoth" — are fairly standard guitar trio fusion fare. Memorable tunes are scarce, though what you get instead is loads of leads and solos from Czajkowski and plenty of duels between him and Goodman. Fans of the rockin' fusion or the aforementioned guitarists will probably enjoy this album, though slipping an acoustic piece or two in among the others would have helped give it a bit more diversity. Still, Czajkowski is a talent to be reckoned with and it will be interesting to see where he goes from here.