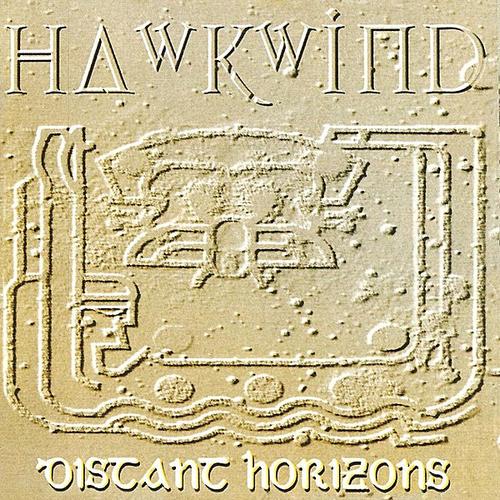 This is the first Hawkwind album with the new band and sets the tone for Hawkwind's entry into the next century (am I profound or what?). Fans will know the band has been losing members of late, all that remains of old is Richard Chadwick. Ron Tree joined the crew a few years back and his impact has yet to prove satisfying in my book. New crew-member is ex-Tubilah Dog guitar player Jerry Richards, Jerry is a festival guy and probably familiar to the British fans. I think a fifth member goes as only being marginally credited, Mr. CuBase. This album was conceived at Dave's studios and to be honest I feared the worst (the early reviews on the net didn't help any). Distant Horizons isn't as bad as I was expecting. It seems like a fleshed out version of a Dave Brock solo album with better production. Brock shares the writing with the band, as each member has credits for a song or two. The Ron songs are his typically hyperactive space punk visions. Some of this album has a not-quite-finished quality to it, the tasty "Kauai" for example, seems like a little vignette of a song, as if it should have been an intro or something. The Richards / Chadwick "Wheels" is a nice one about man's dependence on oil. Distant Horizons shows a band in flux — let's see what the next one does. While I didn't hate this album, it didn't knock me out either.