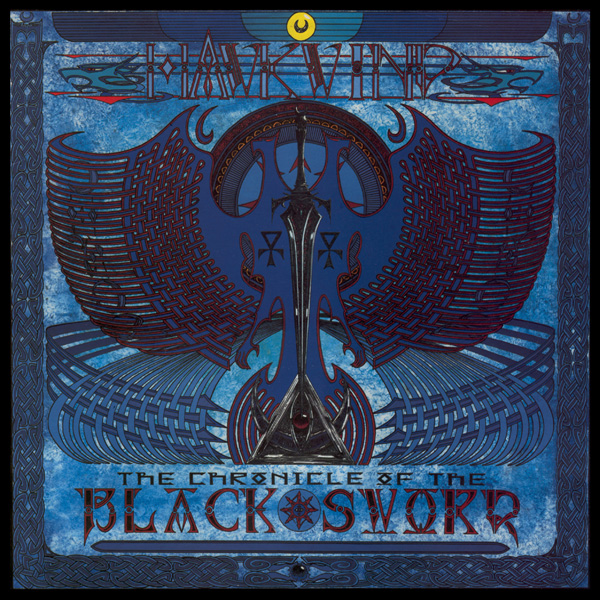 This incarnation of the band is the same as the one that released Church of Hawkwind, except Alan Davey became a full-fledged member, and Martin Griffin was replaced by Danny Thompson on drums and Dave Charles on percussion. Although Chronicle has some very nice moments, it is a bit weaker overall than Church. For one thing, the drums are monotonous and simple, which tends to make the album even more abrasive than it might otherwise have been. Alan Davey does contribute nicely on bass. On this album, it is the slow songs that have greater appeal than the fast ones, which are hampered by the overly simplistic and monotonous drumming of Danny Thompson. "Shade Gate," "The Pulsing Cavern," and "Zarozinia" demonstrate the band's ability to write good slow songs, contrary to popular belief. For the most part, the lyrics on Chronicle focus on the bygone days of dragons, sorcerers, kings, and knights; a notable exception is "Needle Gun," which talks about the downsides of hypodermic addiction. As with Church, the lyrics on Chronicle are another one of the album's strengths. Moreover, the band stretches out on occasion, with Huw occasionally blazing a nice path with his guitar. The three extra songs in the Griffin release are "Arioch" and live versions of "The War I Survived" and "Voice Inside Your Head," which total 12 minutes. "Arioch" is hard-driving tune reminiscent of Starless and Bible Black-era Crimson. The band pulls this track off quite nicely. "The War I Survived" is also straightforward metal, but the tune is rather plain. Compared with these two tracks, the band spreads its wings in "Voice Inside Your Head," the result of which is another ordinary tune with a nice jam. If you're itching to try some unfamiliar Hawkwind, Church of Hawkwind is a better starting point than Chronicle of hte Black Sword, which is less consistent and not as thoughtfully structured as Church. However, Chronicle is worthwhile for ardent Hawkfans.