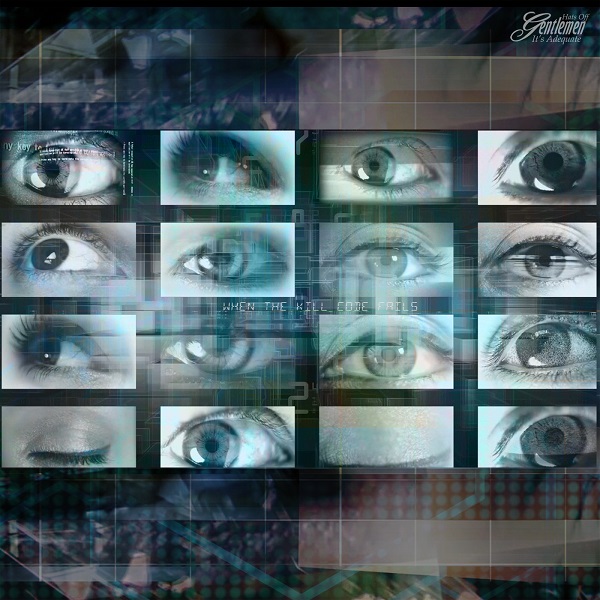 Hats off Gentlemen It’s Adequate, in addition to having an unusual (and awkward) name, have an unusual modus operandi – which some listeners might also find awkward. When the Kill Code Fails presents a series of progressive rock inflected songs interspersed with instrumental pieces combining electronics with other instruments. While this may further the concept (a story about artificial intelligence), it does serve to interrupt the musical flow. An album like this, so tightly tied to not just a concept, but a story, is best experienced as a whole, but just as at least some individual tracks can be pulled out of The Wall (for example), at least some of these tracks work on their own, though of course the lyrics might be out of context. (One could argue that lyrics are always out of context, given that a listener never knows exactly what the writer was thinking, but that’s a philosophical question without practical ramifications.) Tackling the two musical aspects of this album separately, the vocal tunes are a variety of modern progressive rock that reminds me of Parallel or 90°. The songs are accessible without being simplistic, and the arrangements flow nicely. The instruments are all well played, with the guitar generally being the standout; the occasional use of flute is very nice. Keyboards are mostly in a supporting role except on the instrumental tracks. Malcolm Galloway’s voice is expressive in a somewhat strained way that could probably benefit from a little judicious application of reverb or echo, and in general the production is very dry and thin, almost sounding like good quality demos. Ironically, the more minimalistic and electronic tracks sound fuller in some ways than the full-band pieces. As to the lyrics and the story, Galloway’s background in science is apparent, skillfully balancing technological themes with more personal and emotional aspects. When the Kill Code Fails is a promising release, and with a little tweaking of production or mastering could be a real standout. I’m definitely looking forward to see what Galloway and company come up with next.

Hats Off Gentlemen It’s Adequate (HOGIA), what a mouthful and what an oddball band name! HOGIA is led by Malcolm Galloway, singer / songwriter / multi-instrumentalist, part-time neuropathologist, and medical school lecturer. When the Kill Code Fails is HOGIA’s second release and also a concept album. The album musically relates the story of an artificial intelligence (AI) construct’s attempts at coming to grips with discovering that it is not real. Think of it as Bladerunner meets The Matrix meets Pinocchio. I happened to rewatch Bladerunner the other night before devoting my attention to When the Kill Code Fails, and the multiple photos of eyes on the cover recalls the opening sequence of the movie as well. The background story is quite interesting, but not entirely conveyed by the music. Musically the thirteen tracks fall into two basic categories: electronic instrumentals and rock songs with various influences. The title track opens the album and relates the futile attempts at trying to kill a computer virus. This is a dark song with sequenced rhythms with Galloway’s vocals reminding me of Bauhaus. Track two, “Broken Wave,” is a dreamy electronic instrumental that is supposed to invoke virtual space. Next is “Layers” with more Bauhaus influences and a fantastic guitar break that deals with the creation of the AI. Track four is “Connections” with a throbbing bass sequence and other electronics, much like mid-80s Tangerine Dream. At this point the AI is exploring and developing. Now we come to “Head in a Jar.” Odd images come to mind based on the title, but the title is a metaphor. The aggressive vocals, keyboards, guitar, and drums make this the first hard rocking song on the disc. Then we are back to the next electronic instrumental “Link” and more explorations of the virtual world. At this point the AI is getting frustrated and confused about its reality, which comes out in the lyrics to “Going Down.” This song is quite proggy and contains some tasteful flute. The album shifts a bit to an introspective bluesy / jazzy song “I Still Remember You,” something you would expect from Tim Bowness. There is a very nice instrumental break in the middle and the song ends with a soaring guitar solo that fades away. Now the AI is beginning to realize that its memories are false, which it can accept intellectually but not emotionally. The AI slowly accepts what it is and its belief in substrate independence of consciousness as told in “My Clockwork Heart.” There are some similarities on this song to Austin’s Aaron Clift Experiment, which are purely coincidental: precise vocals and intelligent composition. Since the AI wants to be real boy, it escapes into the Internet and starts to run free. “Freerunning” has a simple sequenced riff and a running beat propelled by the bass. “Solace” is a Dave Gilmour influenced post-Roger Waters Pink Floyd type song. It is mostly instrumental and the AI is now aware of the threat that the virus introduced in the title track poses to both the virtual and real worlds. “Glass Lithium” is the last instrumental track with its introspective piano developing into an aggressive techno beat. The AI now multiplies itself to attack and destroy the virus. And the album ends with “Alive.” The AI is confident that it is alive. Quite an ambitious project and an enjoyable listening experience. If you want an in depth understanding of the album and view various videos of the tracks, click on the link below.

Strawbs - Déjà Fou – Ghosts was the first Strawbs record I ever heard, and I seem to remember liking it immensely from the first play; the band quickly became one of my favorites, a position they’ve held for thirty...  (2005) » Read more

Network (Conglomerate) - Precisely the Opposite of What We Now Know to Be True – This heavily Miles Davis influenced band effort is like a an extended jam between Terje Rypdal (adding in some ethereal, Bill Frisell-ish overtones) and Group 87. Or more likely a direct comparison...  (1996) » Read more

Escapade - Obscured Dialogues – Those who have checked out Escapade’s previous two releases, Searching for the Elusive Rainbow and Inner Transluscence, may have some idea of what to expect from this limited edition set of live...  (1998) » Read more