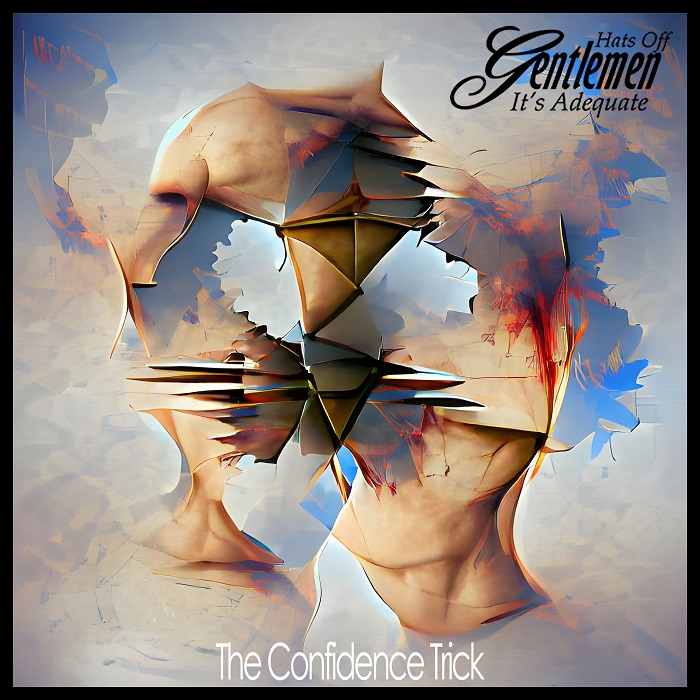 It’s been a while since we’ve heard from Hats Off… and with one listen to The Confidence Trick, the listener should not be surprised that this full length album was a couple years in the making, with the musical and lyrical depth presented across the thirteen cuts. The theme of the album seems to be one of overconfidence, and our failure to recognize the consequences of following those who are overconfident, including some pieces related to historical realities, as well as others that follow a futuristic or science fictional theme. And then, of course there are a handful of great instrumental tunes interspersed between those with heavy, psychologically intense lyrics, all taken together representing a respectable cross-section of what the band is capable of creating. This time out, the band is a trio of de-facto bandleader Malcolm Galloway (keyboards, synths, lead vocals, guitars, lyrics, and programming), Mark Gatland (bass guitar, Chapman stick, backing vocals, guitars, keyboards, and synths), and Kathryn Thomas (flute, alto flute, and backing vocals). Throughout the album one can hear drums, and they sound like the real deal, though nobody is credited with them, so one can assume they must have been programmed, so that certainly represents outstanding work at the drum computer. The music is composed by all three. The set opens with “Silence Is a Statement,” and we are almost immediately introduced to Galloway’s urgent sounding vocals, and then a superb instrumental break of progressive rock proportions with a powerful keyboard solo. “Back Where I Started” continues onward with the insightful lyrics, wholesale changes and more proggy tendencies, though the song is one of the easiest to like in the entire set at just under five minutes. The first instrumental is “Perky Pat,” an electronic tour-de-force that is as busy as it is interesting, leading into a dark and bluesy “World War Terminus,” with equally dark and disconcerting lyrics. “Pretending to Breathe” is the next instrumental, six and a half minutes of proggy odd-meter turns and switchbacks with an interesting shimmering textural feel, leading into “Another Plague,” a soft, dark, almost spoken piece until the two minute mark where it bursts forth with rocking energy and pushes to the edge of art-rock mastery, with a beautifully eclectic guitar solo as the piece trails off. That’s followed with not one, but two captivating instrumental titles, “Refuge” and “Interlude,” accounting for nearly fifteen minutes. The title track and “All Empires Fail” both sport the heavy, thoughtful lyrics mixed with full-on progressive rock tendencies, both informed by 70s Pink Floyd to varying degrees. In all, The Confidence Trick is a powerful musical statement on a a number different levels, and the beautifully illustrated booklet includes all of the album’s lyrics.