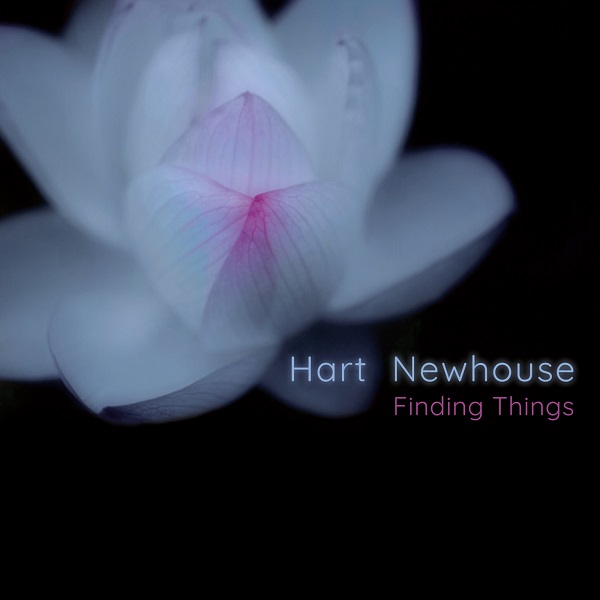 Hart Newhouse is a collaboration between multi-instrumentalists Bret Hart (Moon Men, solo and numerous other projects) and Dave Newhouse (Moon Men, The Muffins, Manna / Mirage and more), but before one jumps to any conclusions, their work on Finding Things sounds nothing at all like Moon Men, instead offering the listener a purely instrumental and explorative ambient industrial sound, using their conventional instrumentation (guitars, bass banjo, mandolin, piano, electric piano, electronics, bass clarinet, alto flute, percussives and effects) to achieve their mysterious ends. Across the album’s six tracks, ranging from a few minutes to over ten, the duo reaches out to pull some incredible sounds out of their instruments, without using field recordings or found sounds, although effects, loops, and other studio gimmickry and sonic enhancements are fair game. Within the six minutes of “Missing Men” they’ve created a piece involving effected guitar, flutes, electronic sounds, and more over random and occasionally chaotic rhythms; like creeping slowly through a subterranean cavern, one never knows what’s coming up next, but it’s always going to be interesting. Perhaps the most soothing ambient piece is the ten and a half minute “Emmalee,” featuring blossoms of howling feedback, protracted stretches of ebow, and gentle touches on electric piano — there is a fair amount of roughage in the textural aspect of the first half of the piece, though as it approaches its concluson we move deeply into mysterious territory. The opener, “A Taste of Caramelized Shallots,” certainly has the best title, and the growling sound that underpins the clarinet solo is positively wicked. The closer, “Ordinary Life,” almost sounds like the work of a santoor or hammer dulcimer, a shimmering sound with many mysterious tones, though that doesn’t appear in the credits, so I suppose it might be a piano played from within with hammers. Something new and unusual appears at every turn throughout the album, the listener can either choose to try and analyze what’s making the sounds, or else just kick back and enjoy it for what it is — either way Finding Things should reward the listener with something new and previously undiscovered on each successive spin.

Fra Fra Sound - Kultiplex – Fra Fra Sound is a Dutch band that's been around since 1980, fusing elements of jazz and world music. Founder/bassist Vincent Henar hails from Surinam in South America, and other members of the band...  (2004) » Read more