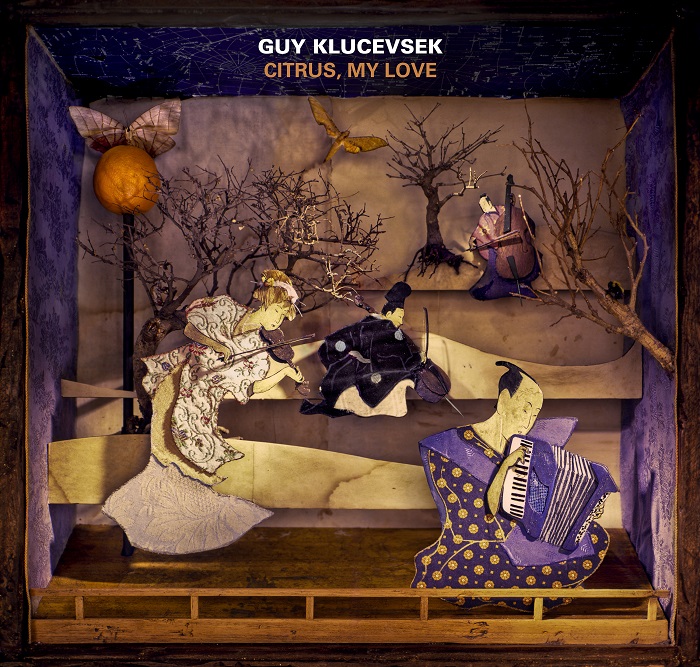 Guy Klucevsek is an American composer and accordionist who has been honing his craft on recordings since the mid-80s, both on his own albums and in collaboration with many others at home and abroad. Some may recognize his name as he was a founding member of the Accordion Tribe along with the late Lars Hollmer (Sweden), Bratko Bibič (Slovenia), Maria Kaleniemi (Finland), and Otto Lechner (Austria), producing three albums and a DVD between 1998 and 2006. But the subject of this review, his album Citrus, My Love dates from earlier in his career; the compositions “Passage North” in three parts, and “Citrus, My Love” in eight parts, date from 1990, and “Patience and Thyme” from 1991, all recorded in 1992, and finally released in 1995 on the Swiss RecRec label. RecRec folded shortly after and this album has been out of print for close to 25 years now This reissue represents the first time it’s been available since. Accordion is most often associated with polka and traditional music, but in fact what we have here in these three extended compositions comes far closer to classical, jazz, and solo improvisation — there’s not even one measure of “rock” of any kind on this album, but in fact these pieces are quite beautiful and contemporary, unlike probably anything else you’ve ever heard before. For his part as a performer, Klucevsek plays accordion and piano throughout, joined as needed by cellist Erik Friedlander, violinist / violist Mary Rowell, double bassist Jonathan Storck. Regarding the original CD release, The three sections of “Passage North” are essentially folk-oriented impressionist classical, dreamy in many ways, stoking the listener’s imagination, building ever on emotional nuances. “Patience and Thyme” is introduced by piano, later joined by the string trio, and moves into more avant-garde territory over its six minute duration. The eight scenes of the title suite comprise about 25 minutes total, again very dreamy and peaceful vignettes that spark the imagination. The CD is available in a standard package (music and booklet only) as well as an expanded package that offers access to thirteen new videos which provide insight into each track, with Klucevsek explaining his compositional techniques and the background of each piece. Either way, what the listener experiences across the dozen tracks of Citrus, My Love is truly engaging in every way.