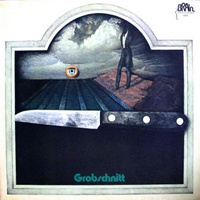 Prog fans have been enjoying a renaissance of vintage prog re-issues. Albums that either never made it to CD or were transferred poorly to begin with are being released for your pleasure. Premier German proggers Grobschnitt are no exception. Their back catalog is being fixed up and reissued (with bonus tracks of course). Case in point, the first album. I had never heard this one, so it was a real treat. I believe that this is the only official release of this album, the previous CD was a bootleg. This one falls between Solar Music and Rockpommel's Land soundwise, not as lyric heavy, just lots of flat out killer prog. Grobschnitt in my opinion have two main features; the incredible guitar-work of Lupo (Gerd-Otto Kühn) and the vocals of Stefan Danielak (no funny name). Lupo's playing is aggressive and tasteful, the guy just rocks. Stefan's vocals have a strong German sound, but he's a great singer nonetheless. I always think of Grobschnitt as a prog version of the Scorpions (the two bands at this time are not that dissimilar). This album isn't as lyrically silly as they were to become, thus the Solar Music comparison. Having never heard the original, I can only say the recording on this CD is excellent. Drummer Eroc (Joachim Ehrig) has remastered this gem, and written the very informative liner notes (English and German). Plus! You get the unreleased "Die Sinfonie" live version (an extended version of "Symphony" brimming with solos), a 30 minute piece from 1971. Recommended highly.