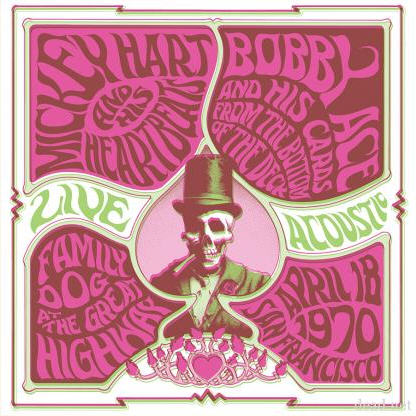 This reel tape turned up in Mountain Girl’s stash of Garcia’s old recordings, a show that was never even known by the Grateful Dead archivists, let alone that it had been recorded. There is a good reason for that. This was an “unplugged” gig, mostly acoustic guitars, scant drums, so if the band had appeared on the bill as The Grateful Dead, thousands of fans would have shown up expecting to hear “Dark Star” and the Dead’s electrified set; instead this was billed as a performance by “Mickey Hart and his Heartbeats” and “Bobby Ace and his Cards from the Bottom of the Deck,” but really it’s the Dead, all of them are there, Garcia, Pigpen, the whole band. One might see this as a preview for some of the band’s new material, in acoustic form, as this show predates the release of Workingman’s Dead by a couple months, and American Beauty by about half a year, yet a lot of that material is here (“Friend of the Devil,” “Cumberland Blues,” “New Speedway Boogie,” “Candyman”) as well as a lot of the traditional material and covers folks were hearing in the band’s electric set at the time (“Don’t Ease Me In,” “I Know You Rider,” “Mama Tried,” etc.). Their set is concluded with an outstanding group of blues covers by Pigpen; normally the band’s organist, harmonica player and sometimes-singer, here it’s just him with an acoustic guitar and his voice. One caveat, however, is that this entire recording is a little scrappy at times; several times throughout one can hear band members complaining to Bear (Owsley, the sound man) that they couldn’t hear the guitars and there are a couple tracks that just fade in from nowhere, though it’s still entirely listenable. Nonetheless, among the hundreds of live Grateful Dead shows that have been released over the years, this one is fairly unique and definitely worthy of attention.