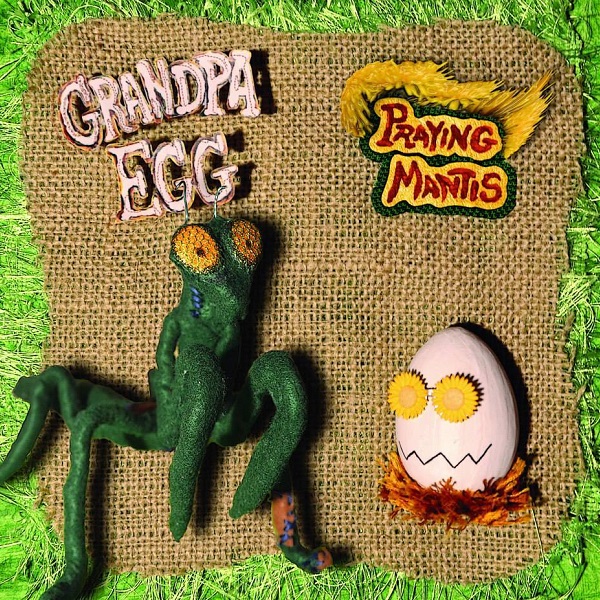 For Grandpa Egg’s second album (following 2011’s Songs for My Cat), the creative nexus of singer/songwriter/musician Jeb Morris and his brother Bart (resonator guitar, bass) has been expanded to include Inga Kristaponyte (bass, organ) and Jordin Goff (percussion). Despite the extra musicians the album is still a stripped-down affair with a folk-psych sound that recalls 60s British pioneers Syd Barrett and Donovan. Matched by whimsical cover art reminiscent of Primus or Green Jelly, the songs feature acoustic guitar, toy piano, and glockenspiel, with breezy arrangements and catchy, child-like melodies. Morris even sings in a quasi-falsetto English accent, sounding like Barry Gibb circa 1967. Praying Mantis is a concept album drawn from Morris’ childhood memories, although he’s architected a larger theme about how things are not always as they appear. The songs are full of whimsy and charm, although a dark undercurrent pervades the lyrics. In “Sally’s House” Morris warbles, “If you catch my meaning / Then you get my drift / Paper hearts aren’t cut out for this shit.” And in “Sunrise House” he laments, “Sunrise, we could comply / But why for to fucking move?” This sort of musical-lyrical dichotomy is nothing new to fans of Steely Dan or St. Vincent, but it’s unusual to hear it in context of sunny psychedelia. I doubt a collection as eccentric as this will launch Grandpa Egg to stardom, but it does put them firmly on the map in the indie-psych scene. I’m curious to see where the story goes from here.