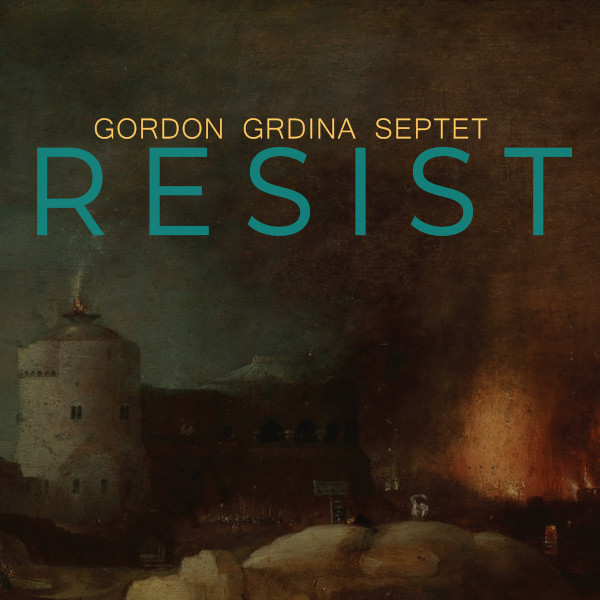 While the opening track accounts for a solid album side and is certainly the main event here, the four additional tracks round out the set nicely, providing some stronger connections to the composer's jazz inclinations. Grdina is a Vacouver BC based guitarist, oud player, composer, and bandleader of several excellent ensembles working avant jazz and improvisational territory, all informed by classical Arabic music via his work on the oud. Only months after his eponymous Nomad Trio release with pianist Matt Mitchell and drummer Jim Black was released, Resist offers something radically different, pairing a jazz quartet (Grdina, saxophonist Jon Irabagon, bassist Tommy Babin, and drummer Kenton Loewen) with a string trio (violist Eyvind Kang, violinist Jesse Zubot, and cellist Peggy Lee), the chemistry within the septet offering a very natural and organic blend of jazz, chamber, and improvisational elements with an extended vocabulary and adventurous spirit, soaring well beyond easy classification. The opening twenty-four minute composition "Resist" was originally written for a special concert at the 2016 TD Vancouver International Jazz Festival, and is probably the most free and open piece among them all, an extended multi-part suite exploring a number of different moods, emotions, and settings, at times feeling more like a free improvisation, though executed with certainty. The chamber trio leads off the opening section which continues about four minutes or so until Grdina and the other players let their presence be known, with a gradual increase in sonic density, until what is essentially an oud solo section with strings that appears around the ten minute mark, then onto what could best be described as free improv (though some coordinated sudden stops and starts bring that into question), alternating with more composed sections carrying the piece to its final conclusion. “Seeds” is a one minute solo guitar interlude that separates the title piece from what comes after. “Varscoma” is a more traditional jazz piece that offers Irabagon plenty of room for an expanded tenor sax solo, which flows directly into “Resist the Middle,” an expansion of the middle section of the opening suite. Closing the set is “Ever Onward,” a nine minute expansion of the oud section of the main suite, gradually growing in intensity until the piece’s gentle conclusion.