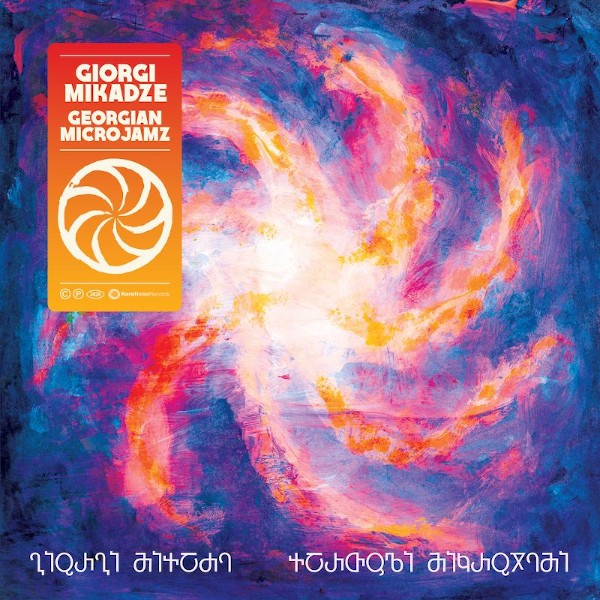 Georgian Microjamz is the latest in the series of microtonal jazz albums on RareNoise, all of which have featured guitarist David Fiuczyniski on fretless guitar. This time out, Georgian keyboardist and composer Giorgi Mikadze is at the helm, and the music is heavily influenced by the traditional music of Mikadze’s homeland. The base style is electric jazz, and barring the use of non-tempered scales, it would sound like a high-quality fusion album, full of great drumming (Sean Wright), nimble fretless bass (Panagiotis Andreou), and dextrous guitar (Fiuczynski). Vocals show up on a few tracks, with Nana Valishvili and the Basiani ensemble providing a powerful contrast to all the instrumental fire. Mikadze’s keyboards center mainly around an electric piano sound, though tuned to something other than 12 tones per octave. He occasionally breaks out a synthesizer for a flashy solo. Wright is a drummer who was unfamiliar to me, but he is outstanding here, imaginatively propulsive and with a wonderful way of working his fills into arrangements without just copying the others’ rhythms. Sometimes he solos through a passage where other things are going on, but manages to not overwhelm the group. Fiuczynski is in fine form with his technical insanity, so if you’re familiar with him, you know what to expect, Mikadze’s keyboard work is quite good, with his solos on electric piano equivalent especially notable for their polytonal natures — rather than playing chords or bass notes with one hand and soloing with the other, he plays simultaneous complementary lines with his two hands. The album features 13 tracks, five of which are short and labeled as “interludes” between the more substantial compositions. For listeners delving into the world of microtonal music, Georgian Microjamz is an enjoyable album, though perhaps not the most accessible for a newcomer.