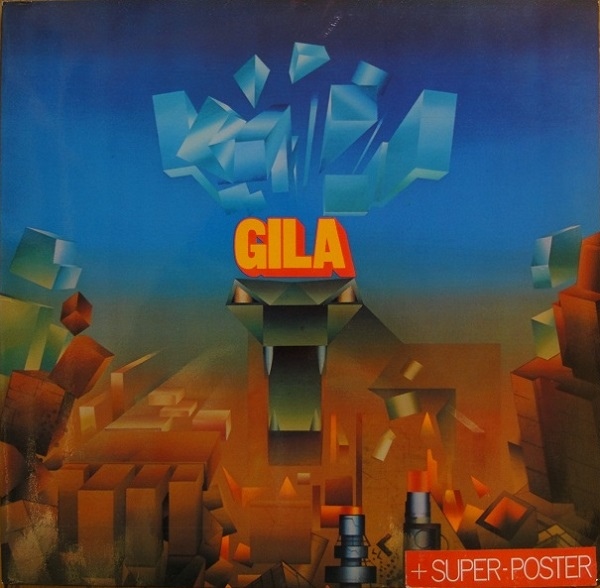 Gila was a band from the Stuttgart area that played psychedelic and progressive rock music and existed in name from the spring of 1969 until the summer of 1974, although in the spring of ’72 guitarist Conny Veit left the band, and then, after a few months downtime, formed a new Gila with all new members and a completely different sound and style. Thus, the Gila of this self-titled first album (Free Electric Sound, which it is commonly referred to as, was only a subtitle, shown on the band poster inside the first edition) is a completely different band that the Gila of 1973’s Bury My Heart at Wounded Knee. This first album Gila has been reissued numerous times on vinyl (in Germany, France, Brazil, and even New Zealand) and several editions exist on CD, beginning with Second Battle’s in 1992. The Garden of Delights CD is from 2017, and now the entire Gila catalog (including 1972’s Night Works live archival release, which features the early lineup before they split) is on the same label on both LP and CD. The original band emerged out of a political commune; the members were the aforementioned guitarist Conny Veit, drummer Daniel Alluno (from Bordeaux), keyboardist Fritz Scheyhing, and Swiss bassist Walter Wiederkehr. The first album (originally on BASF) came a few years after their formation, and shows a jam band that is truly telepathic, every member tracking the moves of the others as each piece proceeds. The six pieces seem to emerge out of something previously composed and rehearsed, but quickly move into free rock improvisational territory. The band is at once psychedelic and free, yet they rock hard on their own terms, with some German vocals and spoken parts cropping up from time to time. A comparison might be made to the early work of Amon Düül II circa Phallus Dei or parts of Yeti, especially in the improvisations. The delicate acoustic guitar piece “Kontakt” on side two that merges into the longer band piece “Kollektivitat” displays the skillful and tasty guitar chops of Veit, and is also exemplary of how the band builds their sound on the fly. But it’s probably the side one closer, “Kommunikation,” at 13 minutes that shows their rock persona best. This is an essential album that successfully bridges the psychedelic and progressive rock worlds without a lot of vocal baggage.