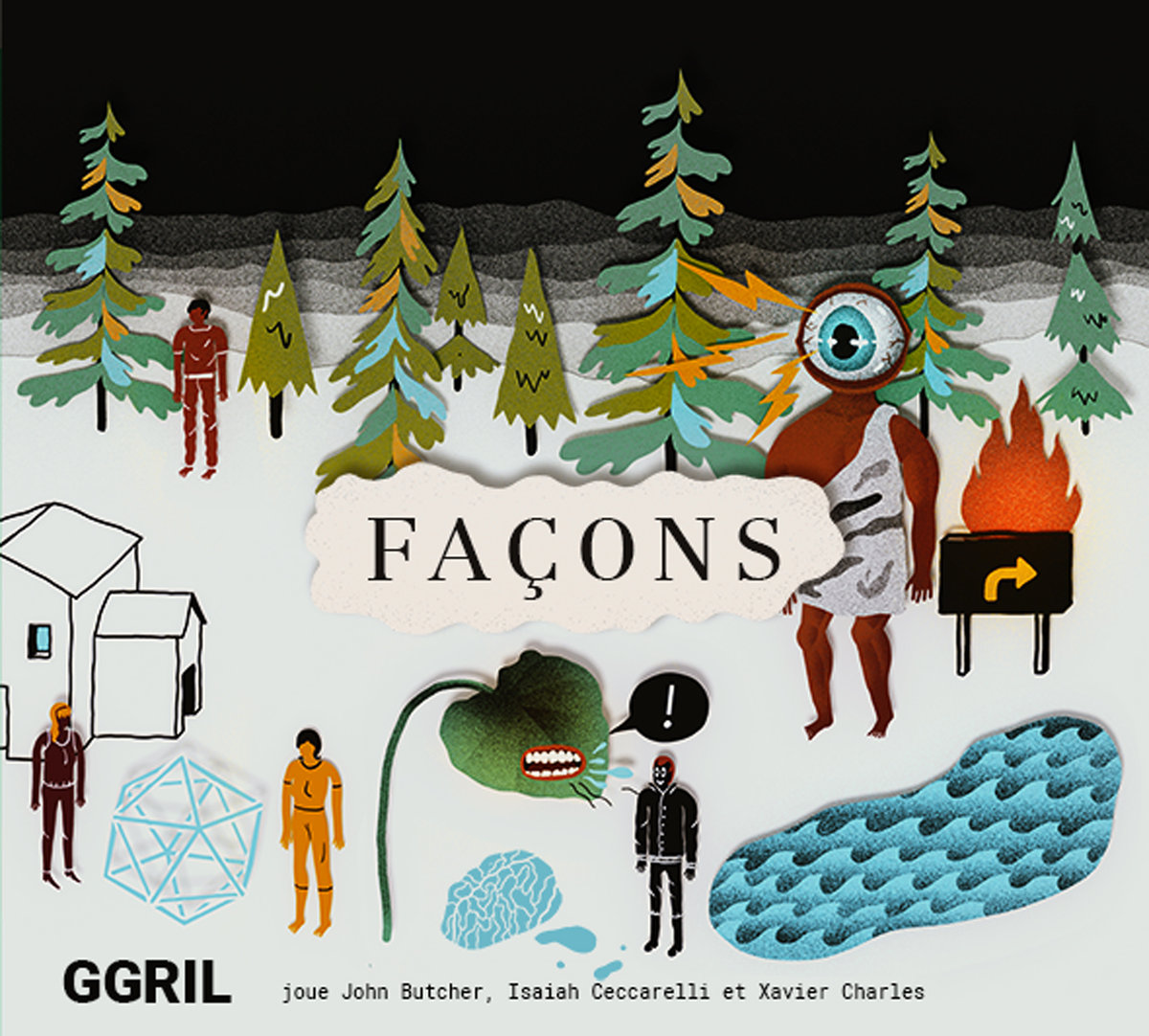 They call themselves a kind of 'postconstructuralist village band'; having turned some heads at the Victoriaville festival in Quebec, they have apparently left some heads spinning, a large group of improvisers from a small town in eastern Quebec, they have been spinning their own unique brand of avant-garde weirdness since 2007, with at least three previous releases working with folks like Jean Derome, Michael Ficher, Evan Parker, and others. Façons is a two disc set; the first disc contains music they created during residencies with Isaiah Ceccarelli and Xavier Charles (one track each), and a second disc with half a dozen tracks created during a residency with John Butcher. Never mind that the sum of the music on both discs combined would have fit on a single disc with almost eight minites to spare; sometimes things are done a certain way for reasons unbeknownst to me. The Isaiah Ceccarelli piece “Organon” is quite the wild noisy ride, with 22 musicians playing all kinds of strings, basses, guitar, woodwinds, brass instruments, organ, percussion, and just about everything else one can imagine, creating basically a wall of noise with some interesting variations therewithin. Sometimes one might be tempted to just walk away from all the racket but those nuances are just too engaging to keep at a distance, then the last six minutes of the piece is something of a slowly devolving chaotic resolution that finally gives up its life at the 21 minute mark. The Xavier Charles piece “Sur les Genoux” is a quieter piece borne of mostly fragmentary woddwind and brass noises along with random bits of percussion, clocking in at seven minutes. The second disc is the six part “Local Fixations” with John Butcher joining in on tenor and soprano sax, and presumably the whole group under his guidance. Rather than a big wall of noise, the group now engages in selective outbursts in the opening section, sometimes even playing bits that are recognizable in a sort of string ensemble element, but the order never lasts long, eventually finding its way back to chaos. The third section, “Wasabi Snarl,” is probably the shortest, at just under three minutes, and perhaps a bit more gentle respite from the general noisiness. I wouldn’t call any of this everyday listening material, at least for me, but it is what it is, and those who are totally immersed in the sounds of the avant-garde will probably be right at home here. In case you were wondering about the group name, it’s short for “Le Grand Group Régional d’Improvisation Libérée.”