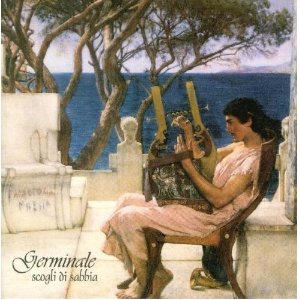 Germinale’s fourth release is a real grab bag. Included are four new studio tracks, four pieces culled from various tributes plus the Colossus/Musea Kalevala project, and a bunch of live recordings from 2002. The group seems to have suffered some recent shakeups with founder and longtime bassist Marco Masoni gone from the scene and the ever-changing drum stool occupied by yet another new face in David Vecchioni. The good news is that the instrumental core of Salvetore Lazzàra (guitar), Andrea Moretti (keyboards), and Alessandro Toniolo (flutes) is intact and laying down some of the finest Italian prog I’ve heard in ages. In fact, the album is worth the price of admission for the new tracks alone. Each is a gem and makes me wonder how come this band isn’t better known. That question is partially answered by the second quartet of songs that ranges from a painfully immature cover of Genesis’ “The Knife” to better, though uneven, Jethro Tull (“Wond’ring Aloud”) and King Crimson (“Dr. Diamond”) covers. The live set pulls together material from the then three studio releases with mixed results. The performances are earnest and entertaining and encompass a nice balance of full band and duet or solo pieces and a good mix of vocal to instrumental work. If only Lazzàra’s guitar weren’t so noticeably out of tune or the performances quite so ragged in places. Still, the group showed real potential back in ‘03 and have only improved since. I for one am eager to hear more.