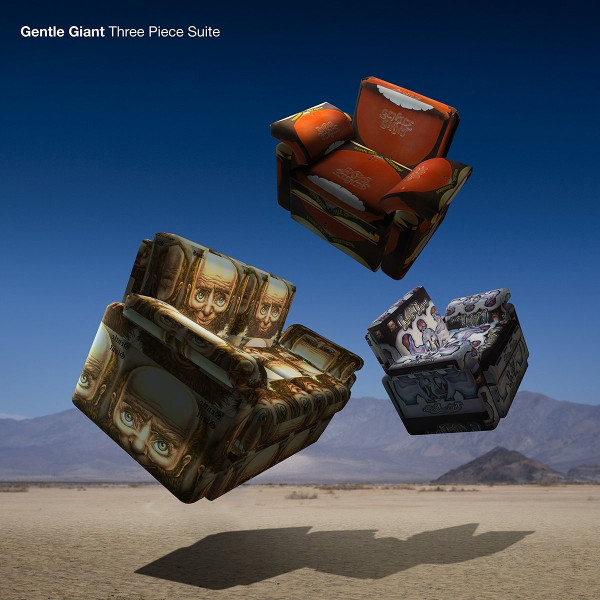 The first three Gentle Giant albums occupy a spot in the history of progressive rock that illustrates the transition from 60s psychedelic rock to full-fledged avant-prog. While the band’s later albums get the majority of the attention from fans and historians, these early efforts provide a fascinating glimpse into the development of one of the most important and artistically successful bands of the last 50 years. When Derek, Ray, and Phil Shulman went into the studio with Kerry Minnear, Gary Green, and Martin Smith in early 1970, there were no rules to be followed, no restrictions on what they could and couldn’t do, and luckily they found themselves in the company of producer Tony Visconti and engineer Roy Baker, both of whom were willing to try new things. The resulting album is wildly inconsistent, with unpredictable songs, sonic experimentation, and widely varying instrumentation, but captures the anything-goes spirit of the time and provides hints of the great music that was to come. “Giant” is a tongue-in-cheek anthem of artistic ambition; “Funny Ways” introduces a number of the lyrical themes that would surface through the band’s career; “Alucard” features the beginnings of the kind of polyphony that would become their signature (along with a killer synth bass sound); and “Why Not?” admirably sums up their answer to the question, “Should we try this?” After the debut album failed to set the world on fire, the band didn’t retreat into safer territory for the follow-up. Instead they went even farther afield, producing the most experimental album of their entire catalog. Acquiring the Taste is even more unpredictable than Gentle Giant, with every track bringing something new and different to the table. Taking full advantage of their multi-instrumental talents, they function as a nearly self-contained chamber ensemble, and Minnear’s formal training was brought to bear with arrangements for strings, percussion, woodwinds, and brass in addition to guitars, bass, drums, and keyboards. And while many of the band’s fans regard it as the odd stepchild, it does contain some of their best tracks, like “Pantagruel’s Nativity,” “Wreck,” and “The House, the Street, the Room.” By the time they were ready to start work on their third album, the band felt confident enough to take on production duties for themselves, having watched Visconti closely for the first two. Three Friends is not as experimental as the sophomore album, and clearly points in the direction the band would follow in the future. While not as experimental, it’s still far from a mainstream effort, with inventive use of strings and mallets. New drummer Malcolm Mortimore brings more breadth to the rhythm parts, and several tracks, like “Prologue” and “Peel the Paint,” have stood the test of time.

And so to the collection at hand. As the Gentle Giant catalog has been revisited to produce upgraded remasters (such as the new Octopus edition I’ve already covered), it came time to look at the early days. The problem was that the master tapes available were incomplete, with only a few tracks from each of the albums surviving. Rather than trying to reconstruct the full albums from inferior sources, Three Piece Suite presents everything that could be found. From Gentle Giant we have “Giant,” “Nothing at All,” and “Why Not?” Acquiring the Taste is represented by only two tracks: “Pantagruel’s Nativity” and “The House, the Street, the Room.” “Schooldays,” “Peel the Paint,” “Mister Class and Quality?” and the title track survive from Three Friends. Two added tracks round out the set: the non-album track “Freedom’s Child” and a single edit of “Nothing at All.” “Freedom’s Child” dates from the sessions for the first album but didn’t fit with the feeling of the other music. It previously appeared on the Under Construction box set along with some other discards from the the earliest sessions, and is a fine late-60s psychedelic song with nice vocal harmonies, but not especially essential in the band’s history. The shortened version of “Nothing at All,” as you might expect, edits out the drum solo, doing a more professional job of the same thing I did back in the 80s for a mixtape. Everything on the CD sounds amazing, with clarity and punch that belies the age of the recordings. These ambitious and talented young musicians are right there with you, as present as any modern recording. It’s a shame that the whole albums couldn’t get the same treatment, but maybe we should be happy that anything at all survived.

On the Blu-ray, there are surround mixes of the tracks on the CD, instrumental versions of those tracks, and flat high-fidelity transfers of the complete albums. While these are not the same as full-fledged original master remixes, they do present the original albums in what is probably the best sound they’ll ever have.