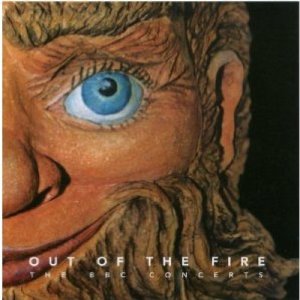 English archive label Hux Records is slowly building an excellent reputation for having the best BBC tapes for re-release. Out of the Fire fits in nicely into their archive plans (alongside Caravan and Kevin Ayers discs) to showcase two excellent (and complete) radio broadcasts from 1973 and 1978. The '78 show was originally available on the English Windsong label, and spotlighted The Missing Piece tour while the '73 show is a thirty minute slice of the band's stage show post In a Glass House. Disc one contains a breakneck version of "Way of Life" with Gary Green's blistering guitar work counter-balancing Ray Shulman's driving bass line with an actual ending (the studio track faded out). "Nothing at All" (from the first album) comes across rather well as rocker with a great drum / glockenspiel interlude (including "Shortnin' Bread" ) from drummer John Weathers (ex-Man). Two versions of "Funny Ways" appear across the set which gives the package two comparable pieces with Kerry Minnear's vibes solo (although the '73 performance has been edited). Disc two has several gems including an intricate version of my favorite piece, "Playing the Game," and aggressive rendering of "For Nobody." And the classy twin acoustic guitars of Green/Shulman grace the wonderfully reflective, "Memories of Old Days." The '78 show focused six of ten tracks on their current album with a more standard rock shift, but still with a high energy level. Liner notes are by Weathers and coordinated by fan club president, Geir Hasnes. Out of the Fire is essential for fans, completists, and risktakers.