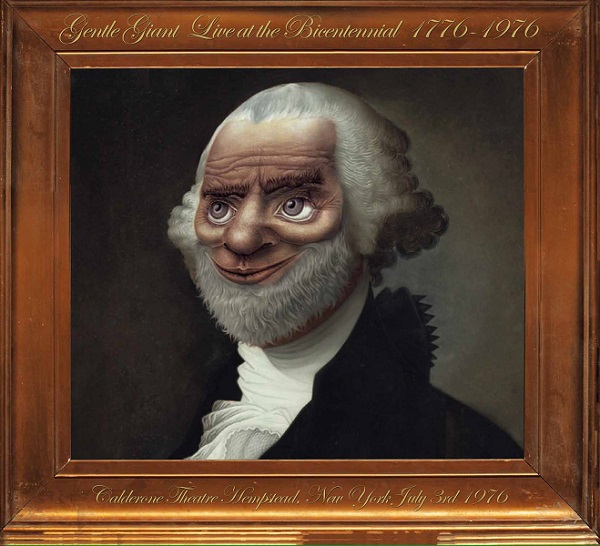 Ask any group of Gentle Giant fans which album is the best and you'll get a variety of answers, but I'd bet that 90% or more of them land on something from Octopus (1972) to Interview (1976). So you would get little argument with the statement that this live date from 1976 captures the band at the peak of their career. Of course, even the best band can have an off night, so I'm happy to report that Live at the Bicentennial does not in any way qualify as a bad night. This is a band of prodigious talent making music of extraordinary originality, and even after decades it's still fresh — unlike the outfits they wore on stage. (To be fair, most all rock musicians dressed similarly at the time.) Much of the music on Bicentennial also appeared on Playing the Fool, with three tracks from Interview ("Interview," "Give It Back," and "Timing") added and a few older tunes dropped ("Funny Ways," "Peel the Paint"). The concert staple "Excerpts from Octopus" is more or less the same, and "So Sincere" is similarly extended with a mass percussion section featuring all of the band. A big surprise is "Timing," which is augmented by a lengthy wah-wah violin solo from Ray Shulman (I'm guessing Derek Shulman took over on bass, as the others are accounted for).

What is still astounding about this band is the array of instruments they bring to bear on the arrangements, extending their studio overdubs into a live setting in an effective way. Kerry Minnear's cello and xylophone are great, as is Ray's violin, and the fact they dared to attempt a four-part recorder arrangement in a rock concert — and made it work — sets them apart from any other band. Ever. But in spite of all this complexity and multi-instrumental virtuosity, they never seem to be merely showing off. The compositions are top-notch, and the arrangements serve them admirably. The sense of humor displayed, like "Three Blind Mice" cropping up in a violin solo, tells us they didn't take themselves too seriously. And when they wanted to, they could really rock, albeit in a kind of off-kilter way. Ray's bass in particular is positively fierce, full of grit and fire.

For any Gentle Giant fan, Live at the Bicentennial is absolutely essential, and probably even works well as an introduction to the band. The recording quality is excellent and the performance is unbeatable. This release gets my highest recommendation and stands as the definitive live statement from one of Progressive Rock's true originals.