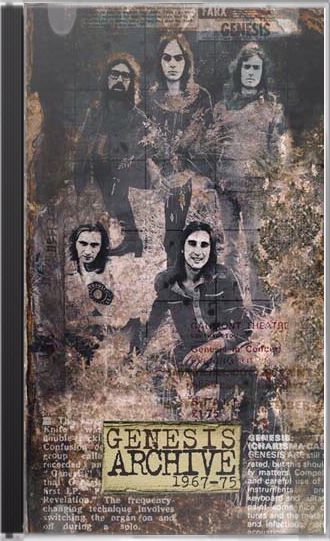 At long last, the first Genesis box arrives. The compilers have chosen an interesting tack with this collection. Whereas many box sets consist primarily of (someone’s) favorite tracks, plus some live and/or unreleased studio material, this four-disc set contains three discs of live material, none of which has been officially released before, and one disc of rarities, demos, and BBC recordings. Chronologically, half of the material comes from 1975, a quarter comes from the band’s earliest days (1967-70), and only one quarter covers 1971-1974, which many consider the heyday of the band. The decision to include an entire live rendition of The Lamb Lies down on Broadway (from the only concert on that tour which was recorded) is a dangerous one, and I personally have my doubts. On the one hand, it’s great to hear the band do justice to the complex and powerful music and imagine what it must have been like to be there (and if I had to pick, Lamb is probably my single favorite Genesis album). But on the other hand, focusing so much on just one night out of eight years tends to detract from the other accomplishments of the band. It also makes the first two discs of the set rather short. There is quite a bit of room left over.

The Lamb concert really sounds superb. I’m amazed at how well the band covers the overdubbed parts of the album — never does it seem like there is anything missing. There has been some controversy over the fact that Peter Gabriel rerecorded the vocal parts, but it’s easy to believe that the costumes did indeed muffle the vocals to the point that the original tracks were unusable. The blend into the studio version of “IT” when the concert tape ran out is handled seamlessly, and is preferable to an abrupt cutoff. Unfortunately, the encores from the show were not recorded. I wish they had substituted live recordings of the same songs from previous tours. There’s plenty of time left on the disc.

The live cuts on disc three are all outstanding renditions of classic tunes, recorded in the years between the first Genesis live album and Gabriel’s departure, with one throwback (“Stagnation”) from 1971. In addition, we get the first official CD release of the songs “Happy the Man” and “Twilight Alehouse,” plus the rare single version of “Watcher in the Skies.” This fills in the major gap of the band’s peak years. The demos and rarities on disc four are a real treat for a Genesis fan. Many of these songs have been written about in the band’s biographies and mentioned in interviews, so it’s nice to hear them at last. Admittedly the sound quality is quite primitive on some of them, but considering the age and origin of the music, they are surprisingly listenable. The only other thought I have about the set (after having it about a week) is that the 80-page book, while very artistically designed, is rather hard to read. The articles are by such relevant people as Tony Banks, Jonathan King (their first producer), Richard MacPhail (long-time band friend and roadie), and Tony Stratton-Smith (manager and head of Charisma Records). There are dozens of vintage photos of the band, both on stage and off, but few of them are labeled in any helpful way.